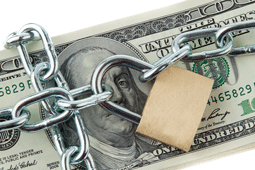 How Safe is Your Money? Fractional Reserve Banking and Other Threats

“You’re thinking of this place all wrong… as if I had the money back in a safe. The money’s not here. Your money’s in Joe’s house…right next to yours. And in the Kennedy house, and Mrs. Macklin’s house, and a hundred others. Why, you’re lending them the money to build, and then, they’re going to pay it back to you as best they can.”
—George Bailey, It’s a Wonderful Life

These famous lines from Frank Capra’s holiday classic, It’s a Wonderful Life, have been used to explain how banking works, though the details don’t exactly reflect current realities. Today, we WISH that our banks were as conservative as George Bailey’s fictional Building and Loan. If John could only borrow what Sally had originally deposited, there would be less risk!

Investopedia defines fractional banking as “a banking system in which only a fraction of bank deposits are backed by actual cash-on-hand and are available for withdrawal.” But banks don’t simply loan out 90% of what they have taken in, they create money through credit, or (defined another way) debt. And for better or worse, this unsecured “money” comprises a large part of our economy.

In recent years, reserve requirements have been only 3 -10% at most banks. That means a bank can lend John 10 or even 33 times or more what Sally has deposited. But in March of 2020, the Federal Reserve Board announced it had “reduced it’s reserve requirement ratios to zero percent effective March 26, 2020.”  This action eliminated reserve requirements for banks and other depository institutions.

What does this mean? When a bank issues a credit card or lends money to a mortgagee, the borrower’s qualifications (and the bank’s reserves) allow the bank to literally manufacture money out of thin air. No printing press needed. No reserves required.

So what gives money its value? Certainly not the paper it’s printed on. It’s also not backed by “the gold standard,” as was once the case. Its value is the worth that people agree the currency represents. The value is derived from the confidence that a society has in the institutions and governments that back the currency. In Frank Capra’s movie, the townspeople’s confidence in George Bailey stopped the bank run.

When home and stock values started sliding into the abyss in 2008 and 2009, what stopped people from running to the bank to withdraw their funds? It was because the accounts were “FDIC insured.” To bolster confidence, the FDIC threw more chips into the poker game, increasing insurance on savings accounts from $100k to $250k in 2008, and temporarily guaranteeing unlimited funds in checking accounts. People felt reassured that their money was in a secure place—in a bank insured by the Government of the United States.

There was only one problem: this confidence wasn’t backed with real assets, but with a poker-faced bluff. As one blogger asserted, “If you think your bank deposits are “insured” or “safe” because of FDIC protection, you’re totally irrational.”

Ike Devji, an asset protection attorney stated, “many professionals I deal with, including a former bank president, have described that limit as a placebo. They believe the FDIC would actually be insolvent in the event of a major run on the banks. The limit was increased to $250,000… to prevent such a run.”

But the change in FDIC guarantees should neither assure nor worry us – we should already be VERY concerned. U.S. bank deposits have swelled to an all-time high. The most recent estimate we found was $17.12 trillion in September 2020, according to ycharts. How much of that $17 trillion is covered by FDIC reserves? Only about two percent. According to a recent FDIC statement, the reserve ratio for the fund that insures deposits in banks would remain at 2% in 2021, in spite of increasing economic risks.

Then there are the derivatives. Yes, like the derivatives that crashed the world economy in the subprime mortgage crisis. Warren Buffett calls them “financial weapons of mass destruction,” and he’s correct. Derivatives such as credit-swap defaults, the toxic assets built on failing mortgages, brought down Lehman Brothers in a matter of weeks.

Major “too big to fail” banks have hundreds of trillions in derivatives… more than the entire global economy. To understand the enormous size and risk of the derivatives market, see the illustrations at Demonocracy’s “Derivatives: the Unregulated Global Casino for Banks” and Visual Capitalist’s “All of the World’s Money and Markets in One Visualization.”

By any objective analysis, the banking system has become essentially an illiquid Ponzi scheme run by the Federal Reserve, which shares more in common with Bernie Madoff (or a poker player) than George Bailey.

A Safe Place to Store Your Cash?

Bank “bail-ins”? Some people fear that what happened in Cypress could happen here. Eight years ago, when major Cypress banks collapsed, they were “bailed in” by creditors, including unsuspecting depositors with more than 100,000 euros. Could that happen here in the US–could depositors be made liable for a bank’s failures? It seems the stage is set for that possibility, according to this Investopedia article: “Why Bank Bail-Ins Will Be the New Bailouts.”

Creditors? There are additional challenges and threats when saving at a bank. We have seen bank accounts drained when a creditor—or perhaps the taxman—comes after it. The debt may be years old, even contested, but if a judgment is obtained, the bank must give the creditor your money. You’ll only find out after it’s gone.

Theft? Cybercriminals can also take your money. One cybersecurity blog lamented, “It seems not a day goes by without customers of a major bank having money stolen from their accounts.” Although the bank will replace it, it can take days of petitioning to be made whole. And if you don’t notice? The money may be gone forever!

Withdrawal limits? And if nothing goes “wrong”? You STILL might have issues withdrawing cash. Recently, many banks are limiting withdrawals. A woman with millions at a bank was told she could only withdraw $1,000 per day.

So if your money can be handed to creditors and predators… and if Americans can’t even withdraw their own money… if we’re all being bluffed into believing our dollars are backed up by real assets in spite of all the evidence to the contrary… Where IS our money SAFE?

George Bailey had the right idea, even if the wrong structure. Since their inception in the US in 1752 when Benjamin Franklin established the Philadelphia Contributionship for the Insurance of Houses From Loss by Fire, mutual insurance companies  have proven themselves as some of the most stable financial institutions in history. Owned entirely by policyholders, not shareholders, mutual insurance companies are financial institutions by the people and for the people. They have paid dividends without fail through the Depression, through every war, recession, and pandemic.

Mutual life insurance companies do not use fractional banking. They don’t need “deposit insurance” because they operate on a legal reserve system. In this system, dollars are backed one-to-one by actual dollars! When a life insurance company issues an insurance policy, they are guaranteeing they can pay the death benefit at any time. They must have the money on hand to do so.

With whole life insurance, policyholders can save money in safe, guaranteed accounts through properly-structured cash value insurance policies. They can borrow against or withdraw money and bypass worries of stability, lack of privacy, annual taxation on gains, and anemic interest rates.

We think that everyone should know about cash value insurance, which some people fittingly call “Privatized Banking.” We believe it provides a solution to the instabilities of our economy, and can even help free Americans from dependency on Wall Street. That’s our dream… to see Americans take their money back from the “Potters” of this world and build prosperity for themselves!

Are you looking for a safe place to put your money?

If you want to do much better than .5% returns in unstable institutions, and if you are tired of the “max out your 401k and keep your fingers crossed” advice of typical financial planning, we’ve got an alternative. To learn more about Partners for Prosperity, Inc., we invite you to explore our blog and listen to our podcast.

—By Kim Butler and Kate Phillips, originally published in 2013, updated in early 2021.