Why Entrepreneurs Rule the World

“In case you didn’t get the memo, jobs are dead.”
-Kate Phillips, Total Wealth Coaching

This week we are proud to feature a guest post by Kate Phillips in celebration of independent entrepreneurs who have left paychecks behind to create their own source of income. A “brief history of business trends, and 7 reasons why self-employed business people are the salt of the earth,” this article was first published on Biznik.com (an online-and-beyond community for “solo-preneurs” and indie business people) in the wake of the 2008-2009 market crash. The original article has been read over 13,400 times and generated over 100 comments.

Why Entrepreneurs Rule the World 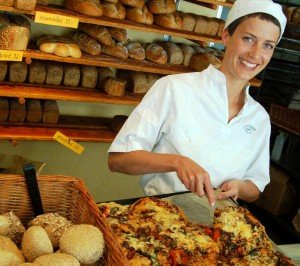 Once upon a time… the world was full of small business people and independent entrepreneurs. Every town had a butcher, a baker, and a candlestick maker. A blacksmith, a barber, and a farmer (or two). A shepherd, a weaver, and a preacher. There were no factories, no corporations, and… no employees.

With the Industrial Revolution, the urban centers grew, and more and more people began to “go to work” for fewer and fewer people. Employees and employers were born. Traditional family trades gave way to companies and corporations, and now mothers, fathers, sometimes even children went to factories for work.

An era of prosperity in the 20th century saw the birth of “homemakers.” No longer working in the fields or the factories, children concentrated on school and home chores, while moms cooked, cleaned, and volunteered. (Mere decades later, evangelists would proclaim this the “traditional family,” the way it had always been. Dad brings home the bacon, mom fries it up in a pan. Amen.)

In this post-World War era, Manufacturing gave way to the Service Industry as the primary employer. Families ate out and traveled with regularity. Superstores from Sears to Freddy’s, Target, and eventually Walmart sprung up as Distribution became an even bigger business than Manufacturing.

Further shifts saw Technology grow as a primary economic force. The field of Information became a commodity and driving force as well. Much manufacturing was now done overseas, and the service industry became more globalized as well, with resorts and even retirement communities springing up around the globe marketed to Americans (and others) whose dollars stretched further elsewhere.

In 2009, we watch as the economic system groans and our government buckles under the weight of unsustainable practices and a perfect storm of disasters.

Our home-grown companies strain to compete in globalized markets, unemployment rises, and consumer spending decreases. Pensions and benefits continue to shrink as established companies scramble to fulfill past promises to their workforce, sometimes unsuccessfully. Chaos reigns in the wake of financial fiascos, while bankers and highly paid CEO’s are strung up in the public square as the new bottom feeders.

Independent business owners feel the pinch of the economy as well, yet we revel in one fact: we are immune from pink slips. We might fail, but we cannot be fired!

One thing is clear to me: no matter what rung of the ladder you are on, jobs are going out of style. Fast.

For years now, the trend has been away from hiring employees and towards hiring independent contractors. Why? Huge savings in benefits, also huge savings in waste. Rather than paying for people’s time, contracts allow employers to pay for the result they want. Deliver this, we’ll pay you “X.”

It’s a pretty good deal for contractors who are effective at what they do, even an opportunity to make more money in less time, with greater flexibility! It also works for the company at large, who is no longer obligated to support employees who demand more and more money each year, sometimes without delivering more value.

Why do you think companies move across the country?  Economist Paul Zane Pilzer says it’s not just for cheaper real estate and “lower operating costs” of the region.  Simply put, a company can find higher-producing workers for less pay by laying off the employees with more seniority, higher pay and better benefits and starting “fresh.” The savings even pays for the move, the severance pay, and then some.

Employees cry “victim!” of the economy, relocations, lay-offs, and their own unsatisfactory jobs, but I think the main antagonist (as is so often the case) is the one in the mirror.

We’ve put our faith and trust in the wrong places, counting on an employer or a company to sustain us, when we should have been developing our own value in the market place. We can no longer count on jobs to sustain us, rescue us, or bail us out.  Employers are doing their best to keep their own head above water, do not count on them to rescue you.

In case you didn’t get the memo: Jobs are Dead.

Let’s say the eulogy, eat our potato salad, and get on with it.  It’s time to break out the butcher knives, baking pans, and candlestick molds once more.

Don’t expect that everyone will “get it.” Our culture does not yet know how to support the entrepreneurs in our midst. (Apply for a home mortgage with a new business, even a profitable one, and you’ll see what I mean.)

People believe that being a business owner is risky, but I believe that having only ONE source of income – ONE source that can be terminated at any time (typically by ONE person) – is the real risk.

The myth of job security will continue to persist; but income security is the only security you want or need.

Two years ago, I attended an orientation at my daughter’s high school. One teacher spoke about “how we’re going to help your children prepare for the job market.” They would learn to write resumes and cover letters, fill out applications and interview for jobs.

I inquired afterwards what was being done to prepare kids for a world in which jobs are going away. What do the kids learn about businesses? About self-employment options? Is there a class teaching entrepreneurial skills? Could I volunteer in such a class?

There was no such class, but I was assured that IF the kids wanted to learn about such things, that an advisor was available to assist them in an after-school club. (Maybe I expected too much from educators, some of the finest people in the world, who by nature and necessity are school district employees.)

Rather, the leadership into this new era will come from the movers, the shakers, the ones who “get it.” From the independent entrepreneurs of the new economy. Us.

As a coach, there is no one I would rather work with than an entrepreneur or creative professional. A job is often a fixed set of requirements and rewards, whereas a business is a living, breathing organism! A salary may be pre-set and static, but business incomes grow when properly nourished. A job may be a collection of pre-determined tasks, but a business is a blank canvass, and the entrepreneur – an artist!

If you ever have moments where you long to go back to the “safe” world of jobs, just refer to the handy list below of Why Entrepreneurs Rule the World:

We get up in the morning because we “want to,” not because we “have to.” Ok, employees don’t “have to” get up either, but there is a huge difference in attitude between someone who feels they “must” punch a clock because they’re expected somewhere, and the entrepreneurial artist who gets up in the morning because the canvass beckons. Sure, some employees are passionate and self-motivated, but among entrepreneurs, it’s more often the rule, not the exception.

No risk, no reward. I’ve taken big chances, and they didn’t all pay off how I wanted, but I’ve grown each step of the way. Plus, I never have to regret the “what if’s.”

You hear that business owners are the engine of the economy, creating jobs for many. Even as a solopreneur, you have probably hired help with your business cards, your blog, or your branding. We create work for others in many unmeasured ways. But first and foremost, we create meaningful work for… ourselves.

Entrepreneurs create their own lifestyle.

Not limited by the boxes provided, we draw outside the lines. Whether your ambition is to stay home with your kids like many indie biz owners, travel the world with Timothy Ferris and the “new rich,” or simply do what you love, entrepreneurship provides us with unlimited options.

Entrepreneurs create their own success.

We are the movers, the shakers, the rainmakers. The opposite of “victims,” entrepreneurs learn to rise above challenges of every kind. Entrepreneurs tend to take responsibility for a high degree of personal learning and growth, as well as become catalysts for community transformation.

Beyond the management vs. union battles, beyond the arguments of whether or not corporations owe employees health care benefits, entrepreneurs rise above by creating their own solutions.

But business owners don’t just provide economic solutions. We make a living providing solutions to all kinds of needs and challenges. Whether the problem is physical pain, a desire for a better relationship, or how to get a package to New York overnight, entrepreneurs are the alchemists of our time, literally turning problems into gold.

Entrepreneurs are, quite simply, the best people I’ve met.

I’m proud to be an entrepreneur – how about you?

Did you enjoy this article? Agree or disagree with it? We invite comments, feedback, likes and shares!

Listen to the Guide to Financial Peace Radio show inspired by this post: “The Myth of Job Security.”