Entrepreneurs by Necessity: Businesses are the New Jobs

“In case you didn’t get the memo; jobs are dead.”
-Kate Phillips, “Why Entrepreneurs Rule the World” 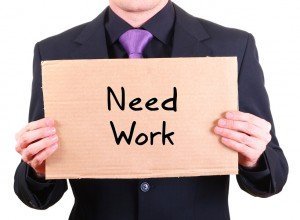 Can’t find a job? The solution that many have found to the woes of the economy is to start their own business. “The Great Recession has pushed many individuals into business ownership due to high unemployment rates,” said Robert Litan, vice president of research and policy at the Kauffman Foundation, which publishes the Kauffman Index of Entrepreneurial Activity.

Although 2011 business start-ups showed a decrease from the prior year, they remained above pre-recession levels at the rate of .32% start-ups per American adult per month. And while a shy one-third of one percent may sound small, this rate translates into 543,000 new business start-ups every month!

That’s the good news. The not-so good news is this: start-up founders prefer to fly solo in the New Economy, which means that each start-up only employs one person instead of many. Observes Litan, “Economic uncertainty likely has made them more cautious, and they prefer to start sole proprietorships rather than more costly employer firms.” Thus many people are solving their own cash flow issues by becoming self-employed, but these solo-start-ups have a limited effect on the economy at large.

Who is starting these businesses? To read the headline-grabbing business success stories, you might conclude that entrepreneurial activity in the United States is spearheaded by under-30 technology geeks founding social media companies. But the truth about business start-ups is a bit different – at least in some ways – than popular media narratives.

A look at 15-years of research from Kauffman.org reveals the trends:

1. The economy remains a “He-conomy.”

Men are still more likely to start a business than women, and the gap has actually widened, with men creating business at a rate nearly double that of women. Perhaps this is related to the fact that for several years, the unemployment rate for men has been substantially higher for men. With industries such as construction and manufacturing hard-hit, 2010 saw over 5 men unemployed to every 4 women, according to figures from the Federal Reserve (see graph below.) 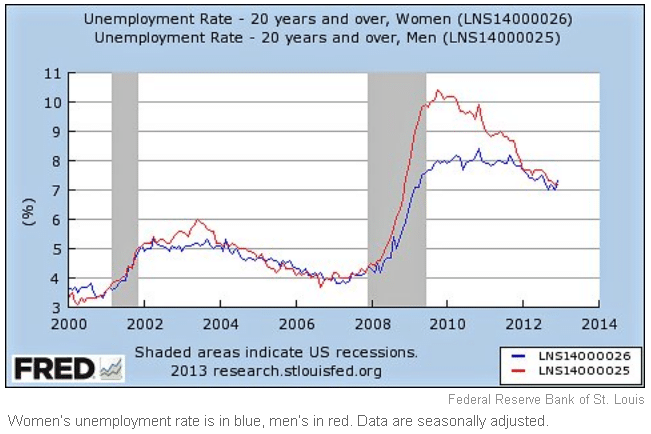 On Jan 4, 2013, a New York Times blog announced that the women’s unemployment had just surpassed the rate for men. Should the unemployment gap be over for now, we may see a partial narrowing of the start-up gap between the sexes.

Every ethnic group except “whites” showed a dramatic decrease in the total percentage of start-ups. Minority start-ups increased from 23.6% of all new businesses to just shy of 40%. Latinos and immigrants (of all ethnicities) are leading this dramatic rise entrepreneurial activity, both more than doubling start-ups since 1996. (View infograph here.)

These gains reflect other trends, such as the substantial increase of the Hispanic population in the U.S., which rose to 17% in 2011, from 13% in 2000, according to the Pew Research Hispanic Center.  Adding to that, the Hispanic unemployment rate during the recession topped out nearly 30% higher than the general unemployment rate in 2011 (11% vs 8.5% in Dec 2013), necessitating a higher rate of self-employment.

Perhaps more accustomed to challenging economies, immigrants of all ethnicities (some whose limited English skills limit their job searches) have modeled true entrepreneurial spirit to the born-and-bred Americans who plead for unemployment benefit extensions. To some, America is still the land of opportunity.

3. It’s a more mature economy. Research shows that 45-54 year old are most likely to start a new business is 45-54 year old  And this is not a new development. “Even before the Great Recession, older entrepreneurs led the way in new business formations,” writes Phillip Moeller in an August 28, 2012, usnews.com article.

The Graying of Entrepreneurialism

Experience: Rather than age, previous industry experience factors heavily into the odds of entrepreneurial success. Older entrepreneurs are more likely to have the needed experience to run their own business or work as an independent consultant for one or more employers in the marketplace.

Start up funds: Access to adequate start up costs and operating cash is the most often named make-or-break factor in businesses. Older entrepreneurs are more likely to have their own savings, credit, or cash value life insurance which can be used or borrowed against to give a business the money it needs to launch.

Longevity. As lifespans have increased, many people are still healthy and capable far beyond their 60’s, and wish to continue working. These individuals are fashioning second careers, both for personal fulfillment and economic profit.

Economic necessity. People over 50 may be more likely to have resources to fund a business, but they tend to have a harder time finding new employment. Starting a business puts them back in control of their lives and finances when job hunting does not produce the hoped-for results.

The Reality of the Older Entrepreneur

The phrase “entrepreneurship boom” sounds optimistic, as if a vast array of economic opportunities awaits these intrepid new business owners. But the real “boom” driving older workers to start new businesses could be the Baby Boom.

As a generalization, Boomers have under-saved and are ill-prepared for full retirement. Compelled to keep working, and being healthy enough to do so, Boomers are finding competition for “mature” jobs has increased. In addition, rising benefit costs (caused in part by the aging Boomer demographic) leads many employers to see a financial advantage in engaging younger employees as well as contract and part-time workers.

In light of these factors, the 2009 Kauffman report concluded, “The United States might be on the cusp of an entrepreneurship boom – not in spite of an aging population but because of it.”

Preparing for the Possibility of Business Ownership

For some, starting new businesses opens a wonderful chapter of success and prosperity in the story of their working life. For others, starting a business or changing to self-employment is the only alternative to unemployment. For all, the trend towards business start-ups represents tremendous opportunities as well as challenges.

Employees who perceive even a possibility of ever being in the job market for any length of time would be wise to consider how a “necessary” period of entrepreneurship might impact their financial well-being. How would starting a business would affect your…

In this unsettled economic climate, committing all of one’s long-term savings to an employer’s qualified plan and obtaining life and disability insurance through the company’s group policies may not be the wisest choices. Better to find ways to integrate personally-owned assets and benefits with employer offerings. To be prepared for the possibility of a start-up in your future, consider the following strategies:

Being prepared for a necessary period of entrepreneurship offers the best opportunity to profit from it.

Could you thrive as a necessary entrepreneur? If you knew you might start a business someday, how would it affect your saving and retirement decisions? We invite you to hear Kim D. H. Butler discuss her newest book, Busting the Retirement Lies with No BS Money Guy Todd Strobel on an episode of Guide to Financial Peace Radio.

Facebook
Twitter
LinkedIn
PrevPreviousRoth Vs Traditional 401k’s and IRAs: Should you Convert?
NextShould You Borrow Against Your Life Insurance Policy?Next