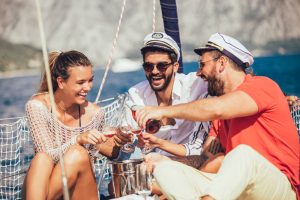 How do the wealthy get that way? What determines your level of wealth and success—is it luck, education, or the size of your inheritance?

According to DQYDJ.com, nearly 12 percent of all American households represent a million dollar net worth. About 1 percent of U.S. households are estimated to be worth $10 million or more. Research indicates that about 80 percent of millionaires are self-made. Many did not complete college. And while a little luck can’t hurt—wealthy people have a way of creating their own opportunities.

The real difference between the wealthy and the working class is habits. These include common behaviors as well as habits of thought. (And no—sipping champagne on a yacht is not what we’re talking about!) Here are twelve habits that can make a big difference:

Wealth Habit #1: Save systematically and automatically.

Since earning more than you spend is essential to wealth building, you can increase your financial success by saving first. Prioritize saving and if you can, automate it so that saving happens without any action necessary.

Wealth Habit #2: Know what you spend.

There is a myth that one of the advantages of being rich is being able to spend all you want without giving a thought to the cost of anything. In reality, the opposite is true! The wealthy get that way precisely because they pay close attention to money flowing in—and out.

Wealthy people don’t spend frivolously or unconsciously. They spend intentionally and according to their values. They abhor waste. According to The Millionaire Next Door, wealthy people often comparison shop, repair rather than purchase new, and buy things “out of season” to get the best price. And they track their spending meticulously (or have a bookkeeper track it for them). If you find yourself wondering where your money goes… this is an essential habit to adopt!

Wealthy people take risks to learn new things, develop new skills, and expand their comfort zones. They are likely to start a business and invest in businesses and/or real estate. All of these actions require risk but can also offer substantial rewards.

What wealthy people DON’T do is gamble! According to Money Crashers, only 6% of wealthy people ever play the lottery, compared with 77% of poor people. Poor people see the lottery as a way to “get lucky.” Rich people know that positive actions, habits, and thinking create opportunities for good things to happen.

When lockdowns happened, many smart people found a way to “pivot” their work or business to meet the new reality. Events, classes and lessons were held online, masks were manufactured, and alternate ways of earning money arose.

A focus on opportunities also lends itself to one of the keys of wealth-building: diversified income. It is said that the average millionaire has seven streams of income. That’s because they are always on the lookout for opportunities!

Wealthy people are much more likely to eat healthy food and keep “junk food” to a minimum, says Thomas Corley, author of Rich Habits, Poor Habits. This may be impacted by education, better access to fresh food, or a bigger food budget.

Coupled with healthy eating, successful people also tend to stay fit by exercising. In their research for The Millionaire Next Door, Thomas Stanley and William Danko found that wealthier people were disciplined to exercise more than 3 hours per week. Corley reports that 76% of wealthy folks do aerobic exercise at least four days per week, compared to 23% of low income people.

Wealthy people tend to get up earlier than others—an average of about 6 a.m. Corley found that 44% of wealthy people wake up three hours before work starts, compared to just 3% of poor people. Robin Sharma, who mentors business leaders, has a “5 AM Club” (and a book by the same name).

Mornings are a time for planning and preparing, also for prayer or meditation and reading. Many successful people also get in their workout in the morning. What successful people don’t do when they wake up is check email first thing. As Mel Robbins says, you should set the tone for the day before you start responding to the requests and demands of others.

I share my routine as well as morning habits of other successful people in “Morning Routines for Productivity and Prosperity.”

Wealth Habit #7: Be intentional with your time.

Successful people are mindful of how they use their time all week long. They may use a time-blocking system such as Dan Sullivan’s Entrepreneurial Time System. They will also outsource busy work so they can use their time for revenue-generating activities.

Many successful people also avoid spending much if any time on social media and they watch little if any television.

Tom Bilyeu went from being a lazy underperformer to building Quest Nutrition, a billion dollar company, and the influential Impact Theory, a show that interviews top authors, business people and thought leaders. How did he do it? Tom credits Carol Dweck’s work on Growth Mindset. When Tom realized that he could continuously expand his skills, talents, and knowledge, it gave him the confidence to succeed.

Successful people tend to learn through their reading habits. The average millionaire reads for at least 30 minutes a day, reports Corley. They are much more likely to read non-fiction books, while poor people tend to read only for entertainment. The most common books and reading materials relate to current events, their career, personal development, or biographies of successful people.

Wealth Habit #9: Own your results.

Successful people don’t blame others and they aren’t concerned about who gets the credit. Rather, they are focused on what they are accomplishing and the impact it will have, whether on their own or with collaborators.

Steve Siebold, the author of How Rich People Think, says that rich people surround themselves with like-minded people. Whether mentors or colleagues, they are people who are committed to the same mission and goals. Surround yourself with people who are successful, driven, and hard-working and they will inspire you to be the same.

Mark Twain once said, “Keep away from people who try to belittle your ambitions. Small people always do that, but the really great make you feel that you, too, can become great.”

According to a Gallup poll, the average retirement age for Americans is 61. However, most wealthy people don’t plan to retire until at least 70—not because they have to keep working, but because they want to.

Working longer also makes a huge difference in one’s wealth. Often, people earn more money in their 60’s—or beyond—than in previous decades! In “Redefine Aging,” we profile, among others, Berkshire Hathawahy’s Warren Buffett and Charlie Munger, who are still going strong at age 89 and 96.

We believe it’s time to re-think retirement—for many reasons. If you love what you do, make a positive difference, and are earning a nice income, why quit? As we say in Busting the Retirement Lies, do what you love for as long as you can—and keep creating prosperity!

Wealth Habit #12: Wealthy people give back.

Truly prosperous people give of their “time, treasures and talents” to help others. Whether volunteering at church, mentoring at-risk youth or donating to help children in crisis or save endangered species, it is a gift to be able to give!

Author Thomas J. Stanley notes that his research indicates that generous givers tend to build more wealth (such as 10%) than those who give little (<1%). That may be counter-intuitive, as they have less money to work with after donating. He surmises this may be because those committed to giving become disciplined to manage their finances accordingly. They watch expenses and prioritize what matters most to them!

What habits of wealthy people do you practice? What habits are you working on?

If you want to build more wealth, knowledge is not enough. You must also pay attention to habits. Look at your daily routine as well as your money habits and see if your behavior matches those who have the success you desire!

And if you want to save and invest like the wealthy… contact Partners for Prosperity! We would love to discuss options for establishing healthy savings habits, earning more on the money you save, gaining beneficial tax treatment, and escaping the roller coaster ride of the stock market.

—By Kim Butler and Kate Phillips