Does Your Income Have “High Beta”? 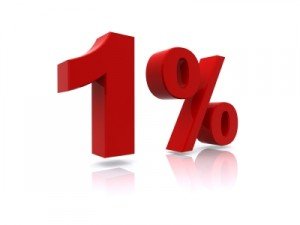 DOES YOUR INCOME HAVE “HIGH BETA”?
(And if it does, what are you going to do about it?)

Recently, the paradigm for a lot of financial discussions has been making distinctions between the 1 percent of Americans who earn the highest annual incomes and the other 99%. In some conversations, the 1 percent has been characterized as the “millionaires and billionaires,” with examples of huge salaries and additional compensation that are almost beyond comprehension, particularly when compared to the average American’s take-home pay.

While these off-the-charts examples of annual income may seem outlandish and far out of proportion to the value of the products they produce or services they provide, this type of anecdotal information distorts the real picture of the top 1 percent that some call “the rich.”

In a CNNMoney column by Tami Luhby published on October 20, 2011 (“Who are the 1 Percent?”), the annual adjusted gross income threshold for qualification in the top 1 percent is not a million dollars. It’s not even $500,000. According to the most current statistics from the Internal Revenue Service, anyone who earned more than $343,927 in 2009 was part of the top 1 percent. And while this number represents a significant annual income, the 1 percent threshold has actually declined 19% in the past two years. (see Fig. 1). In fact, you might say the rich are not getting richer. 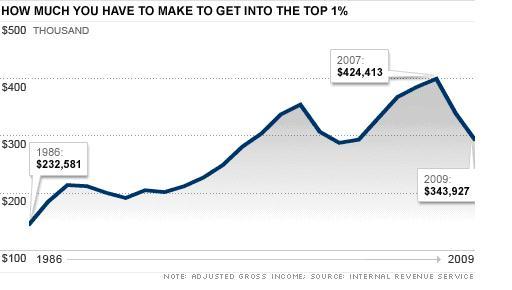 If you make a visual comparison between the income graph in Fig. 1 and a graph of the performance of the S & P 500 stock index over the same time period, there are some interesting similarities. (See Fig. 2). And these similarities have led some financial commentators to interesting conclusions, not only about the income of the “1 Percenters,” but everyone else as well.

Understanding Beta
Financial analysts use a variety of mathematical metrics to evaluate the performance of individual stocks and indexes. One of these terms of evaluation is “beta,” the measure of a stock’s volatility in relation to a broader benchmark, usually an index. By definition, the benchmark index or market has a beta of 1.0, and individual stocks are ranked according to how much they deviate from the benchmark. A stock that swings more than the market over time has a beta above 1.0. If a stock moves less than the market, the stock’s beta is less than 1.0. Thus, if a stock has a beta of 2.0, it means its performance tends to be twice as volatile as the benchmark; if the index goes up 5%, the stock will increase 10%. The same proportional difference will also magnify losses – a 5% drop in an index would predictably result in a 10% loss for the high beta stock. Historically, high beta stocks are riskier but provide a potential for higher returns; low beta stocks pose less risk but also offer lower returns.

High Beta Incomes of the “1-Percenters”
Robert Frank is a senior writer for the Wall Street Journal and author of an upcoming book titled “The High Beta Rich.” In an October 22, 2011, WSJ article adapted from his book, Frank reports some interesting findings about America’s high-income 1-Percenters:

The American rich, who used to be the most stable slice of the personal economy, are now the most volatile, with escalating booms and busts.
During the past three recessions, the top 1% of earners (those making $380,000 or more in 2008) experienced the largest income shocks in percentage terms of any income group in the U.S., according to research from economists Jonathan A. Parker and Annette Vissing-Jorgensen at Northwestern University. When the economy grows, their incomes grow up to three times faster than the rest of the country’s. When the economy falls, their incomes fall two or three times as much.

From statistical analysis, Frank says the beta for the top 1 percent of income earners was .72 for the 35-year period from 1947-1982, meaning their incomes moved generally in line with the overall economy, but with slightly less ups and downs. However, in the succeeding 25 years (1982-2007), the beta for these 1 Percenters has “soared more than three-fold, meaning the incomes of today’s rich have higher betas than many of the riskiest gambling stocks.”

Why the sudden change in beta for the 1-Percenters? Frank says research from several sources points to a range of possibilities: technology and globalization (making businesses and industries more sensitive to changes in demand and economic conditions), rising debt levels (having less ability to withstand income changes), increased consumer consumption (resulting in lower saving levels), and greater “financialization,” which means high beta income and wealth is tied to the stock market, either in the form of compensation (such as stock options) or assets (shares of stock). This explains why the graph of the 1-Percenters’ income looks very much like the graph for the stock market.

But whatever the cause, Frank sees the income volatility of 1 Percenters as having a significant trickle-down effect on everyone else:

As go the high beta rich, so goes America. Their hyper-cycles will become our own, as the consumer economy, financial markets and tax revenues experience more rapid and extreme spikes and crashes.

Is Your Income “High Beta”?

Even if your annual adjusted gross income doesn’t quite reach the 1 percent level, the issues of income beta are relevant. For example, how much has your household’s income increased or decreased in the past few years? Have there been significant income fluctuations due to a job loss, reduced work hours, or diminished bonuses? How has this affected your ability to maintain your lifestyle, or stay on track with your long-term financial objectives, such as retirement, saving for college, buying a vacation property, or leaving a financial legacy?

If your income history is showing the same volatility as a high beta stock, it might also alter your long-term financial priorities. Much of the conventional retirement accumulation model is built on steady, predictable employment, i.e., you can afford regular contributions to a qualified retirement account because you have the expectation that your regular employment will provide enough to meet today’s living expenses. But what if you’re not sure about the source or amount of next year’s income?

This uncertainty might compel you to consider building larger cash reserves, or wonder what you could do if you lost employer-sponsored insurance benefits. And if your future income seems less stable, perhaps it seems prudent to pursue less aggressive investment strategies, because how bad would it be to lose income and accumulation value at the same time?

One of the underlying observations of Frank’s reporting is how much income fluctuation affects other aspects of individual, corporate and governmental finances. When incomes were stable, lenders were more liberal in their approval standards, and consumers felt more confident about buying, even if they had to borrow. Businesses could invest in new facilities and hire more workers, knowing people could afford their products and services. And municipalities could budget for infrastructure improvements and community services, knowing the tax base could support these items. But high beta fluctuations of income cause major disruptions in the ability to systematically plan for your financial future.

If an assessment of your personal income situation finds you with a high beta, now is the perfect time to reassess both your financial strategies and your ability to carry them out. Income uncertainty doesn’t mean you can’t reach your objectives, but it may require you to take a different approach.

IF YOUR INCOME IS “HIGH BETA,” WHY NOT FIND SOME WAYS TO OFFSET THAT VOLATILITY IN OTHER PARTS OF YOUR FINANCIAL LIFE? A CONSULTATION WITH YOUR FINANCIAL PROFESSIONALS COULD UNCOVER EXCELLENT STRATEGIES TO BALANCE YOUR “HIGH BETAS”.