The Shrinking of the Middle Class (and Why We Welcome It)

“Never let the truth get in the way of a good story.”
– Mark Twain 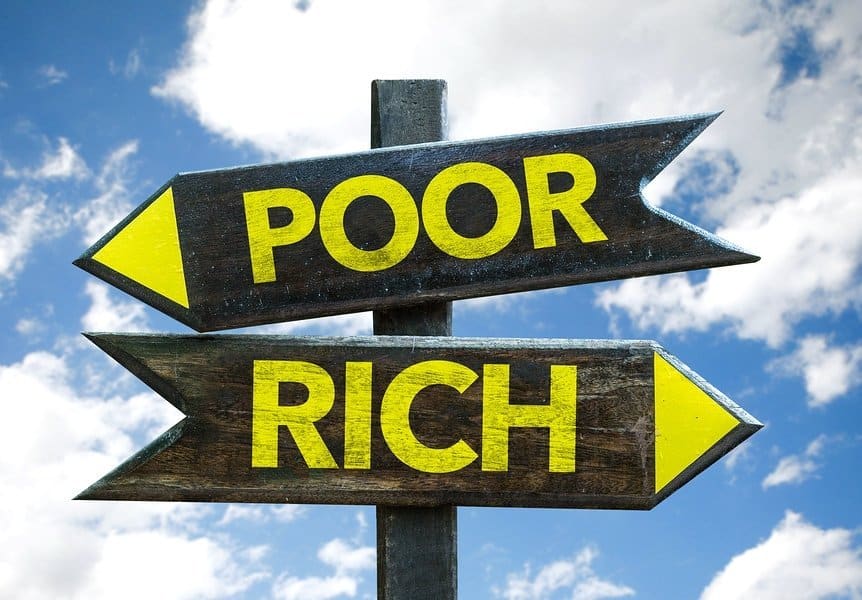 “The shrinking middle class” is generally spoken about in ominous terms, a warning, perhaps in a political speech, one designed to generate indignation and protest. Headlines such as “America’s Middle Class Is Headed Towards Extinction” alarm the masses and presidential candidates debate how to fix this rarely-questioned problem.

Is the Middle-Class Worse Off?

According to Corey Iacono in a July 11, 2015, article on FEE.org (FEE stands for the Foundation for Economic Education), this is a misleading claim.

Iacono examines the often-repeated assertion that the middle class is worse off now than in the past. He believes the statistic comes from looking at the median household income over time and adjusting for inflation using the Consumer Price Index (CPI). However, he points out, this is problematic, as it does not account for the fact that households are growing smaller over time. Even if median income stayed the same over time, shrinking households would increase income per household member.

Additionally, statistics that assert that the middle class is floundering look at income before taxes and transfers. Transfer payments and tax credits (like the Earned Income Tax Credit) make up a significant bolsters income for many lower-income families.

Citing research published by the National Tax Journal, Iacono states, “Broadening the income definition to post-tax, post-transfer, size-adjusted household cash income, middle-class Americans are found to have made substantial gains,” amounting to a 37 percent increase in income over the 1979-2007 period.

Similarly, in 2014, the Congressional Budget Office found that adjusting for changing household size and looking at income after taxes and transfers, households in all income groups are better off than they were a few decades ago. Says Iacono, “The incomes of households in the three middle income quintiles grew 40 percent between 1979 and 2011. Somewhat surprisingly, given the histrionics about the state of America’s poor, income in households in the lowest quintile was 48 percent higher in 2011 than it was in 1979.”

If lower-income households do not “feel” better off, it is likely because our standards of what constitutes an acceptable lifestyle have risen so much. Twenty years ago, a cell phone was a luxury, now having a cell phone, laptop, tablet and internet access is considered the norm… even if you are a middle schooler. Real incomes (adjusted for inflation) have risen practically across the board, along with our lifestyle desires and expectations.

Is the Middle Class Shrinking? 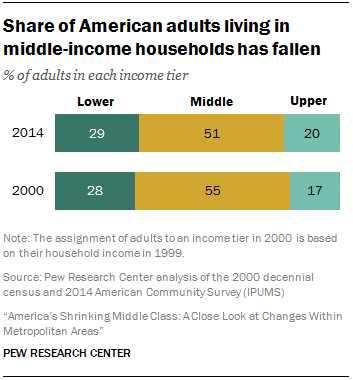 Now that we’ve busted the myth that the middle class is worse off, let’s examine the assertion that it is shrinking. Pew Research defines “middle class” as people with an income, adjusted for household size and local living costs, between 66% and 200% of median income. And yes, regardless of which side of the political aisle the statistics come from, by this definition, the middle class is indeed shrinking.

Even for those in the bottom quintile, as mentioned above, there is more assistance now than in previous decades. According to statistics from the IRS, the Earned Income Tax Credit program alone (which subsidizes lower working Americans through the tax code) has swelled from  to $66.7 billion in 2015, from $5.07 billion since its inception in 1975. Americans in the lowest income quintile (and even some in the second lowest quintile) actually have negative tax rates, according to figures from the Congressional Budget Office. This means that some lower income workers (especially heads of household) pay no federal income taxes at all, instead receiving checks from the U.S. Treasury at tax time. 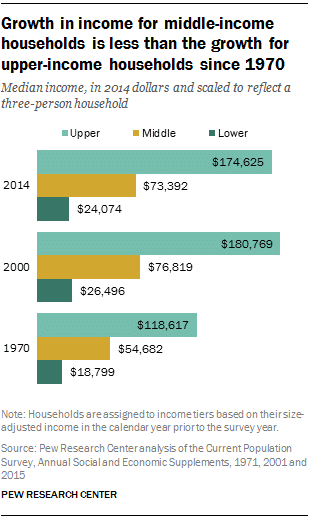 Commenting on the Urban Institute’s findings, Forbes.com contributor Tim Worstall concludes, “The truth is that the American middle class is shrinking. But the major cause of this is that large parts of the population are simply becoming too rich to be considered middle class any more. And I think that’s great. I cannot bring myself to complain about 30% of Americans now living better and richer lives than their forbears did.”

Jeffrey Dorfman, professor of economics at the University of Georgia, also notes this trend in his December 15, 2015 op-ed, “The Death of the Middle Class has Been Greatly Exaggerated,” that “most of the so-called demise of the American middle class is due to people becoming too rich for Pew to include in that category anymore.” Dorfman adds, “The demise of the middle class is a bad thing if you care primarily about relative incomes. If pretty much everyone is better off, many people would call that progress.”

Not everyone calls this progress. Some people are not happy that their slice of the pie has grown only a tiny bit larger when others have experienced more substantial increases. But the truth is that most people have bigger pieces of pie because the pie itself has grown larger. Yes, there is greater income equality. But what has caused it?

Some argue that opportunity is the cause… that the current income equality may actually be a good thing, because it means that there are still ways to economically better ourselves.

In this age of technology and information, lack of access to a formal college education means less, as people have tools to teach themselves, even, if necessary, through library-accessed computers. Whether gaining skills for employment or pleasure, learning to restore a car, play the violin, write a resume or build a website has never been easier.

It’s also easier and cheaper to start a business or become self-employed than ever before. Online platforms and tools have helped millions of everyday Americans leverage their efforts and level the playing field. The rise of Youtube, Facebook, podcasting, WordPress and other blogging platforms allow businesses to be started on a shoestring.

Some will take advantage of these opportunities, others will not (or, in some cases, cannot due to poor health or disabilities.) It is true that incomes are widening in the U.S., and that some challenges come with this trend. But shouldn’t we still want America to be the land of opportunity? And when 3x more people are climbing into the upper middle class than slipping into the lower middle class, is this not a positive trend?

The middle class IS shrinking. Now what? 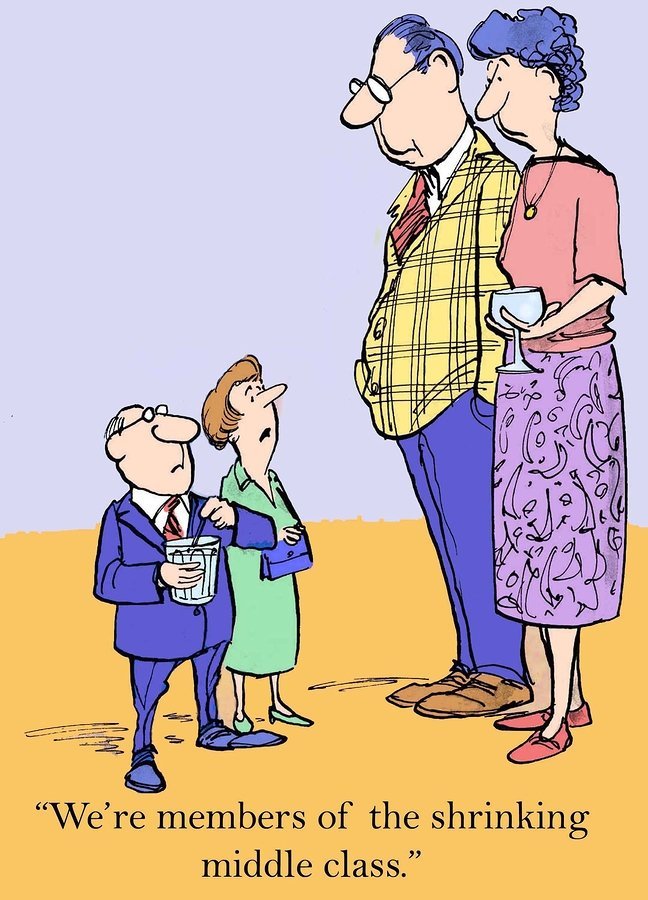 If feel yourself falling out of the middle class, do what you can to exercise a measure of control over your destiny. If you have a growth mindset and a strong work ethic, your financial outlook is positive. If you have a mindset of entitlement or feel trapped within your own comfort zones, your financial future will be challenged, even in times of prosperity.

We are all influenced by circumstances and economic conditions, but we can still make prosperous choices. Decide to learn the skills and acquire the knowledge necessary to raise your income and increase your wealth – not simply your ability to spend more.

The path to prosperity is still alive and well! Some guideposts for the journey:

If we can help, don’t hesitate to reach out to us. We are your Partners for Prosperity!