Money & Life Review: A Film about Money that Aims to Change Your Life

“We can’t solve problems by using the same kind of thinking we used when we created them.”
-Abert Einstein 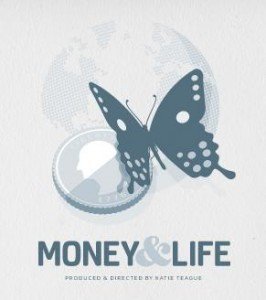 Money is one of the most powerful forces in our lives, both in our psyches and in our physical realities. Money makes the world go around. Life as we know it would grind to a halt without it. Yet it remains something of an enigma, largely unexamined.

We tend to either unconsciously embrace a contradictory, love-hate-relationship with money, or see it as a one-sided caricature. Money is heralded as the all-powerful solution to our problems, perhaps even the source of security, even happiness. Conversely, it gets blamed as the root of all evil, greed, and injustice.

In Money & Life, the groundbreaking documentary screening now in cities around the country, money takes center stage as a fascinating, fully-fleshed out yet still-evolving character. We learn of money’s birth as a brilliant piece of social technology, contemplate its evolution through the centuries, discuss society’s near-worship of it today, and examine its current incarnation in an unsustainable debt-based economy.

It’s a complex story, but the beautiful graphics, personal stories, and interviews from financial thought leaders provide many windows from which to view money. Filmmaker Katie Teague remains off camera, yet we are drawn into the conversation she has started.

We’re invited to confront the compulsion to consume with a dot.com multi-millionaire who, after an extended spending splurge, tames the “Greed Bug” with volunteer work in India. We come face to face with financial shame as we follow a woman through bankruptcy to a sense of inner abundance on the other side. We are challenged with the ways in which our corporations “liquidate the earth” for profit, and asked to consider how our man-made economy has moved away from the natural order of sufficiency and sustainability.

Covering all sides of the coin, Money & Life avoids sermonizing, demonizing, or new age assertions that the law of attraction will magically produce “an unlimited supply of money.” Resisting temptation to collapse “money” and “materialism,” (though both are examined), money itself is neither vilified nor exalted, but is viewed as both an instrument of generosity and a catalyst for scarcity.

An essay-style film, the dialogue is carried forward through narration, personal stories, and interviews with an array of thought leaders, from economists and sustainability experts to reverends, rabbis, and a former JP Morgan executive. Among them:

(Hopefully, the forthcoming DVD will have a wealth of extended interviews, as I suspect much additional wisdom had to be left on the cutting floor.)

Money & Life unveils fractional reserve banking and exposes The Fed and the “global casino” created by unsound banking practices. But rather than descending into an angry tirade against wrong doers, the film proceeds gracefully, finding hope and even purpose in our economic woes. (As one expert suggests in the film, perhaps we need the sh*# to really hit the fan before humankind takes the opportunity to re-invent our systemically flawed monetary system.)

Rather than offer opinions or even “solutions” to our money mess, the film asks us to find our own answers to questions such as:

Money & Life reminds us that as the creators of money, “we made it all up” in the first place, and we can recreate it as well. We are invited to own our role as creator and envision new possibilities such as alternative economic systems, complimentary currencies, and sustainable financial solutions (as is already happening on micro-levels around the world.)

The final section on re-imagining money, initially struck me as too optimistic, almost naïve. I thought, “Do we really think the powers that be are going to let the 99% brainstorm a new monetary model?” But in retrospect, the film led me to realize how many of the solutions are already here, at least, in seed-form.

How many of us shop at co-ops, grow our own food, barter for goods or services, and have abandoned typical earn-and-consume models in favor of meaningful vocations and creative pursuits? I’m currently bartering marketing coaching for recording studio time. I’m using technology to carve a path as a “prosperity therapist” who works from home while caretaking an elderly parent. I’ve been self-employed for 18 years and have been “doing money differently” for a long time.

Filmmaker Teague practices what she preaches, modeling alternative means and creative solutions. Sidestepping typical means of funding for her excellent debut documentary (lots of debt or a few wealthy producers), she utilized Kickstarter, a “crowdfunding” platform to find financial support for her film. And rather than seek a wide theatrical release, she went on tour to debut the film in grassroot showings around the country designed to foster dialogue and engagement. (Currently, screenings are scheduled in Boulder, CO on April 28,  and Chicago, IL on May 9, 2013. )

I recommend this film wholeheartedly to readers of the ProsperityThinkers.com blog, out-of-the-box financial advisors, or anyone who is interested in “doing money differently.” As a matter of fact, the film, in many ways, lays a foundation that makes the Prosperity Economics model practiced by Partner for Prosperity highly desirable. (P4P’s Kim Butler coined the term Prosperity Economics for methods of saving and investing that utilize alternative investments along with co-operatively owned insurance to build wealth. No stock market, bank, or government required.)

To find out how you can watch Money & Life, go to the website to see if there are screenings in your area.  DVD and streaming versions are scheduled to be released May 1st, 2013.

Have you seen Money & Life? What did you think? Your comments and reflections are encouraged below.