How Do You Measure Success? Thriving with The Third Metric

“Don’t just go out there and climb the ladder of success. Instead, redefine success. Because the world desperately needs it.” 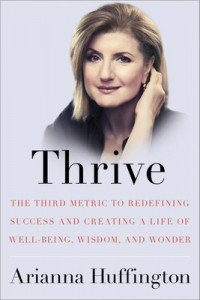 –Arianna Huffington in an interview for Forbes.com

Born in Greece, educated at Cambridge, and now a well-known American entrepreneur and author, Arianna Huffington has achieved success in almost every way you can imagine. And for her next success, this woman – who has been named by Time magazine as one of the world’s 100 Most Influential People more than once – is leading a movement to redefine success itself.

A syndicated columnist, former wife of a Congressman and sometimes-controversial media figure, Arianna has authored best-selling books, co-hosted a popular radio show, challenged Arnold Schwarzenegger in an election, and been nominated for an Emmy (as a writer for Politically Incorrect.)

Of course, she is best known for co-founding The Huffington Post, which grew quickly from its start in 2005 to become one of the most-quoted and heavily-trafficked websites on the internet. The sale of The Huffington Post to AOL in 2009 netted Huffington an estimated $100 million, pre-tax. And yet, such accomplishments may have done less to define Arianna than the jarring low-point that forced her to re-evaluate the very meaning of success.

In April of 2007, Arianna Huffington had a wake-up call… literally. She woke up on her home office floor in a pool of her own blood. She had collapsed from exhaustion and lack of sleep, hitting the corner of her desk and injuring her cheekbone and eye on the way down. Eventually, various medical scans and tests confirmed that there was nothing wrong with her that had caused her collapse… medically. And yet, something had gone very wrong. Normally driven to work endless hours, Arianna admits that doctor’s waiting rooms served as the perfect place to start to asking herself, “Is this what success looks like? Is this the life I wanted?”

As Huffington describes in her newly-released book, Thrive: The Third Metric to Redefining Success and Creating a Life of Well-Being, Wisdom and Wonder, our society’s notion of success has been reduced to two metrics: money and power. In fact, success, money, and power have practically become synonymous in the minds of many.

As Arianna told Forbes in a recent interview,

“This idea of success can work— or at least appear to work— in the short term. But over the long term, money and power by themselves are like a two- legged stool— you can balance on them for a while, but eventually you’re going to topple over. And more and more people— very successful people— are toppling over. To live the lives we truly want and deserve, and not just the lives we settle for, we need a Third Metric, a third measure of success that goes beyond the two metrics of money and power….”

What does this “Third Metric” look like in the real world?

It looks like renewing ourselves through meditation, yoga, and getting enough sleep; making ourselves a priority in our own lives; prevention rather than managing medical crises.

It looks like growing our inner selves rather than sacrificing our peace of mind for a promotion or a profit; being people who practice balance, connection, empathy and compassion.

It looks like the ability to disconnect ourselves from our tech devices to enjoy being present with others, ourselves, nature, and this precious moment.

And it looks like embracing our responsibility to contribute to the well-being of others through financial giving, mentorship, and acts of service.

We love the Third Metric approach, as it fits in so well with what we’ve also been teaching and writing about here at Partners for Prosperity. As Kim articulates in her latest book, Busting the Retirement Lies,  we do not believe that accumulating money to reach a point where you never have to work again – or any other monetary goal – is the secret to fulfillment.

Money should be the result of the value we bring to others, not the prize we sacrifice ourselves to obtain. As human beings – not simply financial beings – we are born to serve, to connect, to love, and to utilize our unique talents and passions. Our fulfillment comes from doing what we love and making a difference for others, not in “winning” the game of money and power. (And as we tap into our deepest gifts, monetary success may indeed be a prosperous result!)

We are also believers that health is a foundation of wealth, and that valuing ourselves through healthy habits such as good food, exercise, spiritual practice and rest are critical to our prosperity – which is itself a measurement of so much more than money.

It’s time to redefine success. We are grateful to Arianna and the many thought-leaders she has gathered to talk about the importance of our inner lives, our generosity, our health, and our relationship to others and the world around us.

“Remember that while there will be plenty of signposts along your path directing you to make money and climb up the ladder, there will be almost no signposts reminding you to stay connected to the essence of who you are, to take care of yourself along the way, to reach out to others, to pause to wonder, and to connect to that place from which everything is possible.”

The Third Metric is now more than a book sub-title or a category on The Huffington Post – it’s a movement, a conversation, and a series of events.

The first Third Metric conference  happened in June of 2013 in Huffington’s New York apartment. (Yes, you’re in a different category of “success” when you have a New York apartment large enough to host conferences and concerts, but as Arianna insists, The Third Metric is NOT just for those who have already achieved wealth or power. It’s a way of life; a blueprint to follow; a set of holistic habits to foster a type of success that does not come at the expense of others or the person achieving it.)

Since you likely weren’t there, we’ll take the liberty of sharing some of Arianna’s favorite quotes from the event panelists and attendees from her column:

Mark Bertolini on balancing life and work: “When your work defines what your work-life balance is, you’ve lost control.”

Dr. Mark Hyman on stress: “If you really knew what was happening when you’re stressed, you’d freak out. It is not pretty.”

Katie Couric on being ‘in the moment’: “If we took a little more time to be in the moment and talk about real things, our life would be so much better.”

Amishi Jha on multi-tasking: “Multitasking is a myth — what we actually do is task-switching… Out of all the things our mind does, that switching function is the most depleting.”

Rebecca Miller on change: “If the whole system doesn’t change a little, then our daughters and granddaughters will still be having the same conversations… As women rise to the top we need to begin to create workplaces that are actually different.”

Bill George on men: “The men I know are just as concerned about being caught up in money and power… We want the same opportunities to define a life of meaning and service.”

George Stephanopoulos on meditation: “It’s been a lifesaver. I’ve been meditating for about two years now — consistently. I did it for reasons that we’re discussing now, here — to manage a frenetic life… I was always overly tired, over-stressed, feeling a kind of, constant low-level impatience, and I didn’t like it.”

On taking care of yourself: “I know now that I can’t go out into the world and help someone else unless I’m taking care of myself.” – Christina Huffington.

Sallie Krawcheck on what sustains her: “How I get through it: I am endlessly grateful.”

Bill George on leadership: “If you don’t have an introspective practice, I don’t know how you’ll be a successful leader.”

Sally Osberg on giving back: “Giving back always sounds to me like you’re paying a debt. What about just giving?”

Zeke Emanuel on cutting health-care costs: “The only way we’re going to save money and cut costs is prevention.”

Susan Cain on passion: “I would add another element to that Third Metric, and that’s passion… and learning how to say no to things that are not in the service of that passion.”

For more on The Third Metric, see the Huffington Post’s Third Metric category of articles and Arianna’s new book, Thrive:

Facebook
Twitter
LinkedIn
PrevPreviousHow to Buy Life Insurance for a Child
NextThe Leverage Test: Can You Use Your Assets as Collateral?Next