Is It Time to Get Out of the Stock Market?

If you’re invested in the stock market, is it time to take your money and run? 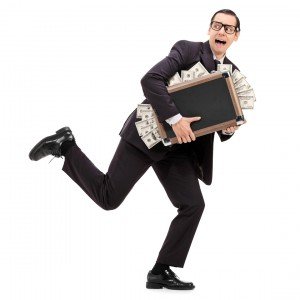 I don’t have my crystal ball (and I tend to avoid speculation), but the answer to the question, “Is it time to get out of the stock market?” just might be YES.

As an advisor practicing Prosperity Economics, I’m never one to recommend that clients invest heavily (if at all) in the stock market in the first place. And right now, I am more relieved than ever that my livelihood does not depend on me convincing people to keep plugging money into the stock market. I don’t think my conscience would allow it.

I’m not into fear-mongering and believe we have to focus on the positive and what we can control. I’m also a realist when it comes to knowing that the stock market is not something you or I can control. We can only control how – or whether – we engage with it.

The signs are pointing to now being a very good time to move money out of equities and into alternative investments or even cash equivalents.

Some observations and things to consider:

In a compelling and controversial Forbes.com article, “Disaster Is Inevitable When The Two-Decade Old Stock Bubble Bursts.” Columbo makes his case that are markets are fundamentally unhealthy, as we have only been substituting one bubble for another to keep prices from ever fully correcting.

According to Columbo, we’re not in a recovery, we’re in a “Bubblecovery.”

Investopedia defines “Bubblecovery” (coined by Jesse Columbo) as “When the economy appears to be coming back from a recession, but may actually be entering an asset bubble masquerading as a recovery, caused by the ease of obtaining inexpensive loans to finance asset purchases. The problem… is that unlike a real economic recovery, which is based on sound fundamentals, a bubblecovery is based on speculative investments with short-term growth potential but long-term uncertainty.”

To make his case, Columbo analyzes several economic indicators (complete with many charts and graphs, please click article above link for details) that suggest stock prices are poised for a significant correction, such as

Rock-bottom interest rates and corresponding bond rates have allowed consumers and corporations to buy cheaply, but such spending may not be sustainable as rates rise. Columbo asserts, “…corporations binge on debt to invest in projects, buyouts, and stock buybacks – many of which will prove to be malinvestments when interest rates finally rise again.”

Additionally, he notes, low interest rates have encouraged investors to buy stocks on margin, which is exactly the pattern that preceded the last two stock crashes as well as the Great Depression. Columbo believes that heavy use of margin has only kept stock valuations inflated for the past two decades.

Intentionally re-inflating the bubble to prevent a true correction, the Fed has pumped liquidity into the economy and financial markets following the Financial Crisis by resorting to outright money printing. Creating nearly $4 trillion worth of new money via its quantitative easing programs, each QE injection led to a corresponding surge in stock prices. 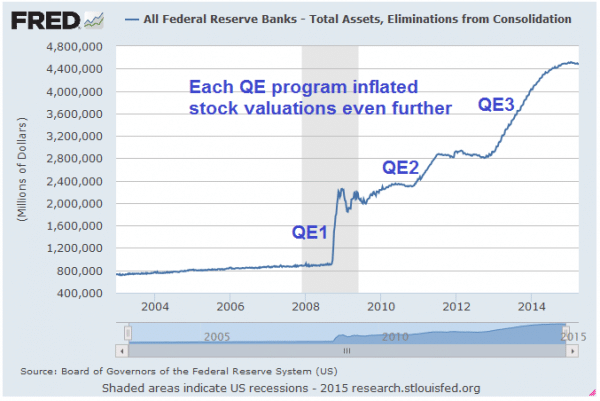 Additional factors inflating the bubble include:

His conclusion is sobering:

American wealth itself has been in a bubble. Pensions, 401(k)s, and other investment accounts are loaded up on an asset that is worth a fraction of what it is currently valued at. The masses are banking their future and retirements on a house of cards….

How will it end? Says Columbo, “I believe that the longer-term U.S. stock bubble will end when the very fuel behind it is removed, which is record low interest rates.

The Financial Media: “What Bubble?”

Few of the “major media” financial analysts or gurus are sounding any alarms. You might even say they’re re-arranging the deck chairs on the Titanic… or trying to pick which ones may float the best. Kiplinger’s (which I’m convinced has completely sold out) says nonchalantly, “The bull market may have more room to run in 2015…” before they give their list of 25 stocks to buy now.

What else can we expect? The financial media’s profits are funded by advertisers – major financial corporations that tell American investors to do one thing (keep playing at Wall Street’s table) while they do something else (invest in business, real estate, even life insurance, see COLI or BOLI.)

The field of behavioral finance demonstrates the impact that psychological factors such as over-confidence, confirmation bias, and recency have on investing decisions. Regarding recency, an article from a firm that serves wealth managers reminds us:

“In early 2000, after four years of a raging bull market in technology, media and telecom stocks that lifted the entire stock market to new highs, it was easy to convince investors—professional and amateur—that it was “different this time”; and that despite the experiences of past boom and bust cycles, stocks lifted amid the tech frenzy would continue to rise unabated. This, of course, was not the case, and the tech bubble deflated in a tragic spectacle.”

This is not a drill. Please take your dollars and proceed calmly to the nearest stock market exit.

I’m not big on predictions and yes, the market could climb for another year, two, or more. But it will turn around, likely sooner than later.

I am encouraging everyone I know to get OUT of the market. Partners for Prosperity is here to help. The clients who followed our advice in 2008 did not sustain the losses that most American investors did. They prospered while the Great Recession raged havoc on the market. Contact us and we’ll set up a time to review your situation and your options.

If You Cash Out of Stocks, Where Can You PUT Your Money?

We don’t hold “assets under management”, but we do recommend alternative investments and vehicles for income, growth, and cash, none of which are pegged to the stocks or bonds. If you would like information about our recommended stock market alternatives and our options for accredited investors, you can contact us directly. 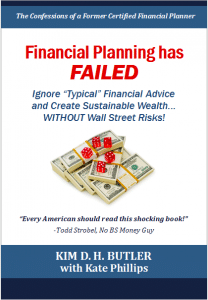 Alternatively, you can download our new book, Financial Planning Has FAILED. It explains why investors should AVOID “typical” advice and instead use the principles and strategies of Prosperity Economics to create sustainable wealth and Prosperity.

As an extra bonus, we’ll also send you our most popular articles and interviews over the next 5 weeks. (It’s sort of a crash course in Prosperity Economics designed to help you take back control of your mindset as well as your money!)

There’s no cost or obligation. Just opt in below and you’ll get your Financial Planning Has FAILED ebook and other resources right now!

Once your e-mail address is verified, you will receive everything in the Prosperity Accelerator Pack and a subscription to the Prosperity on Purpose weekly ezine.