Three Monkeys and a Cat: the Truth about Picking Stocks 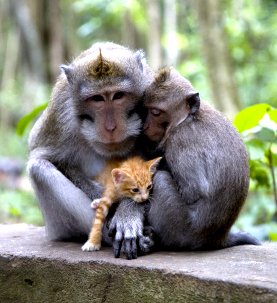 “A blindfolded monkey throwing darts at a newspaper’s financial pages could select a portfolio that would do just as well as one carefully selected by experts.”
-Burton Malkiel, Asset manager and author of A Random Walk Down Wall Street.

Who knew that Economist Burton Malkiel’s comment would be so prophetic!? Malkiel hypothesized that share prices move completely at random, making stock markets entirely unpredictable. While his statement about blindfolded monkeys and dartboards was a reference to the randomized nature of stocks and not a prescription for stock market success, it was only a matter of time before it was put to the test.

In 1988, the Wall Street Journal ran the first of many Dartboard stock picking contests. WSJ staffers acting as the monkeys, throwing darts at a stock table, while investment experts picked their own stocks. After six months, they compared the results of the two methods, along with stock picks from some of its readers.

The results? In the initial contest, the experts edged out the darts. However, as further “experiments” continued, the experts fared less well against darts thrown by people and, eventually, monkeys.

In January 1999, a chimpanzee actress named Raven (the star of Babe, Pig in the City) threw 10 darts at a dartboard of 133 internet related companies. Within six trading days one of her picks was up a whopping 95%! By the year’s end, according to George Fisher, author of The Streetsmart Guide to Overlooked Stocks, Raven’s portfolio of ten randomly-selected stocks had outperformed more than 6,000 internet and technology money managers earning an astonishing 213% return.

However, nothing lasts forever, and 2000 marked the beginning of a different trend. Raven the stock-picking monkey fared even worse in the dot.com bust than the professionals, leading John Petrick of Perennial Financial Services to surmise, “Any monkey with a dart can potentially make money in a rising market.”

Adam Monk is the now-retired Chicago Sun-Times investment guru and Brazilian cinnamon-ring tail cebus monkey who picked his stocks by circling them in the newspaper with a red pen. Outperforming the indexes four years in a row, from 2003-2006, Monk did it again in 2008 with a portfolio that only lost 14% while most money managers were posting losses upwards of 35%. (The “Free by 50” financial blog noted that Adam Monk’s returns bested the Mad Money host Jim Cramer’s choices by significant margins 2 out of 3 years.)

In 2010, as money managers tried to walk erect at the tail end of the recession, circus chimpanzee Lusha thrived. Her portfolio topped 94% of Russia’s mutual funds, nearly tripling her initial capital of 1 million rubles ($35,884), the Daily Mail reported.

Selecting eight cubes among 30 that represented different investments, Lusha mixed private and state-run equities, turbo-charging her returns by putting her money on banks that received a Kremlin bailout. (Those rose 600%, according to the tabloid.) Pavel Trunin, the head of monetary policy at the Institute for the Economy in Transition, had this response to her luck: “It shows that financial knowledge does not play a great role in giving forecasts to how the market will change.”

Children and Cats Beat the Odds (and the Experts)

In the WSJ’s 46th Investment Dartboard Contest of 2012, the darts again beat Wall Street Journal reader’s picks, as they have just over 60% of the time since 1988. Sandra Ward, the senior editor of Barron’s (an investment magazine published by the Dow Jones & Company), lost 4.5% with her picks. However, a class of sixth-graders from Fairfield, Connecticut saw their choices soar nearly 32%.

In 2013, monkeys, dartboards, school children and financial experts faced a fierce new competitor in stock picking: Orlando the cat, a British tabby. The Observer Portfolio Challenge pitted the cat against a team of high-level financial professionals, including a wealth manager, a stockbroker and a fund manager and a team of novice finance students from John Warner School in Hertfordshire.

Each team invested a notional £5,000 in five companies from the FTSE All-Share index at the start of the year. After every three months, they could exchange any stocks, replacing them with others from the index. At the end of the third quarter, the professionals had generated £497 of profit compared with £292 managed by Orlando. But an unexpected turnaround in the final quarter gave Orlando the lead. By the year’s end, the cat’s portfolio had increased a total of nearly 11%, ending the year at £5,542.60. The professionals finished with £5,176.60, a dismal gain of 3.52%.

As The Guardian describes, “While the professionals used their decades of investment knowledge and traditional stock-picking methods, the cat selected stocks by throwing his favourite toy mouse on a grid of numbers allocated to different companies.”

While all in fun, the point of these stock-picking contests should not be lost.

Very few people have been able to effectively “time the market” or choose stocks that perform better than randomized choices or an index that mirrors a broad spectrum of the stock market. As Burton Malkiel affirmed in a 2009 interview 36 years after his book was published, “Sure, there are a few people who have outperformed the index. But you can almost count them on one hand.”

Still have the urge to ride the stock market? Like any potentially dangerous sport, do so with extreme caution.

Practice. If you still have delusions of stock-picking grandeur… do what they do in the stock picking contests and use “pretend” money for awhile, practicing trades while following the results you would be having. Then start and stay small, with an amount of money that you could afford to lose.

Be realistic. The stock market is merely a socially approved game of luck, albeit rigged more kindly than an all-or-nothing game of roulette. When you purchase stocks or mutual funds, you are not saving or even investing in the most traditional sense, regardless of what you have been told. You are actually using your money to make bets that prices will go up instead of down. The odds may be with you, but you should be very aware that investing is a risky game with no guarantees.

Limit your losses. Set up a stop loss order to prevent excessive losses. Then set up a trailing stop order if stocks begin to gain rapidly. If a stocks starts going down beyond a pre-determined point or percentage or point, the account automatically sells, helping you preventing further losses.

Limit your exposure. Like a weekend in Vegas, if you can afford the take the risk and find fulfillment in the entertainment value of the adventure and the stories you can trade at cocktail parties later, well, who’s to judge? But you wouldn’t take your nest egg to Vegas (hopefully!) – or delegate your portfolio to monkeys picking stocks. Likewise, you shouldn’t rely on Wall Street stocks as a safe, sustainable, or complete investment strategy.

Is your money already in the market?

The great majority of investors with 401ks and other qualified plans have their assets in mutual funds, which of course are comprised of many stocks and reflect market ups and downs. Employee-sponsored retirement programs limit investment options and preclude even common choices such as individual stocks and cash value life insurance.

Want to expand your choices? We can help you consider some ways to limit your risk, diversify your investments and increase your odds for growth. Contact Partners for Prosperity today!