Getting Slapped by the “Fat Tail”

In theory, there is no difference between theory and practice.

In practice, there is.

People aren’t rational. That’s the basic conclusion of all sorts of studies in behavioral finance, a discipline which tries to understand what motivates and determines people’s financial decisions. Greed, fear, the inability to delay gratification, and a host of other character flaws are the reasons most people stumble through their financial lives, missing opportunities, wasting money, and never quite achieving their financial dreams.

But, in an ironic twist, it also appears that one of the factors in poor decision-making may be an over-reliance on logic and science. This is a result of believing that “scientific” economic models can provide an accurate picture of the truth, when in fact these mathematical and statistical studies often distort or misrepresent economic reality.

Carl Friedrich Gauss (1777-1855) was a German mathematician who today is considered one of history’s most influential mathematicians. Sometimes called the “Prince of Mathematicians,” Gauss’ work has had a remarkable ongoing influence in many fields of mathematics and science. 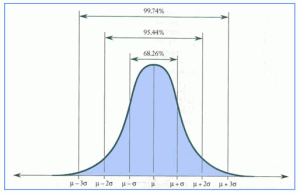 Some of Gauss’ study involved statistics and the patterns of probability. Working from a basic question, “Given a range of possible outcomes, which ones are most likely to occur?” Gauss developed a model, known as a Gaussian distribution, to identify, explain and predict outcomes. Today, this model is also often referred to as the Bell Curve, because of the shape of the graph that results. Of all possible outcomes, the most likely results are clustered at the center of the data range, while the least probable events are set at either end, sometimes referred to as the “tails”.

A simple version of the Bell Curve is mapping the possible numerical outcomes from rolling two six-sided dice. The most likely outcome from a random throw is 7 (which will occur 16.67% of the time, while the least likely combination is either 2 or 12 (only 2.78%). The second most likely outcomes are 6 and 8, which are each likely to appear 13.89% of the time. This means that 45% of all throws will be 6, 7, or 8. (If you have any experience with the game of craps, these probability distributions are probably already evident.)

The Bell Curve as a Predictive Tool

There are many statistical mappings that result in this bell-shaped format, with the high probability outcomes at the center, and low probability events at either end. This is sometimes referred to as a “normal distribution,” and when it appears, analysts in statistics, natural sciences, and social sciences often use the Bell Curve as a simple model for complex phenomena.

In the financial arena, probability models are pervasive, used by everyone from fund managers to individuals planning for retirement. And therein lies a problem: Sometimes these simple models just don’t do an adequate job of analyzing the “complex phenomena” that impact financial outcomes.

It’s the Improbable Event That Matters

Nassim Taleb is a Lebanese philosopher, author, and statistician, currently serving as a Distinguished Professor of Risk Engineering at the New York University, Polytechnic Institute. Taleb’s 2007 book about unpredictable events, “The Black Swan,” was cited by the New York Times as one of the 12 most influential books written since World War II.

The major premise of the Black Swan is that the impact of rare events is huge and highly underrated, and because we are not conditioned to expect them, we are poorly equipped to handle them, which makes their impact even greater. These rare events are said to have a “fat tail” – the outcomes might appear at the tails of the distribution, but when they occur, their impact is enormous.

In fact, the impact of a fat tail financial event is so great that preparing for the possibility of it occurring is much more important than preparing for other far more likely scenarios. Thus, while a global stock market meltdown might be unlikely, preparing to effectively deal with it is more important than making financial decisions based on more probable, yet less dramatic situations.

In light of his Black Swan thesis, Taleb has called normal distribution assumptions a “great intellectual fraud. Despite the shortcomings of the bell (normal distribution) curve, reliance on it is accelerating… Finance academia is too entrenched in the paradigm to stop calling it an acceptable approximation.”

Taleb’s criticism isn’t simply an intellectual spat between math nerds over minute details. The real issue is how these ideas have permeated individual financial planning processes. Probability models for retirement, risk tolerance, and portfolio allocation frequently use these normal distribution models to make projections and guide decisions. The danger: Because these are the most likely outcomes, people assume these will be their outcomes. When something else happens, they are ill-prepared.

Some other financial experts support Taleb’s perspective. Howard Marks, a prominent Los Angeles hedge fund manager and writer, said in a February 5, 2011, keynote address at the Columbia Investment Management Association* that successful investors need to develop “second-level thinking,” which goes beyond a mechanistic approach that views financial decision-making as a “recipe from a cookbook,” and instead focuses on weighing the consequences of other possible outcomes as well.

“According to normal distribution, each of the market crises observed over the past decade should only have occurred once every 1,000 years or so. Clearly, the normal distribution completely misses the likelihood of market crisis and therefore provides risk estimates that dangerously underestimate true risk.”

*Notes from this speech were posted in a review from Ravi Nagajaran, on www.seekingalpha.com/article/251099

Fat-Tail Risk Management: Protecting Against What We Don’t Know

Taleb, Marks, Gross, and other experts have come through the recent recession with a sharpened focus on the critical need to manage risk in financial programs, both for institutions and individuals. Most “big scary events” may have a low probability of happening, but because the consequences are too great, it is foolish to simply ignore them just because of their “once-in-a-blue-moon” nature. As Van Mueller, a veteran life insurance representative from Wisconsin, put it in his February 2011, commentary, Van’s 10 Ideas and Views – February 2011, the primary goal “is not to make people rich, but to keep them from being poor.”

IS YOUR FINANCIAL PROGRAM INCORPORATING THESE CONCEPTS?

OR ARE YOU STILL WORKING FROM A “NORMAL DISTRIBUTION” MODEL?

Facebook
Twitter
LinkedIn
PrevPreviousFinancial Protocol: How To Compensate Family Caregivers
NextIgnorant Certainty: (“I know I don’t like it, even though I don’t know what it is.”)Next