The Truth About Inflation: CPI Smoke and Mirrors

“History is largely a history of inflation, usually inflations engineered by governments for the gain of governments.”
– Friedrich A. Hayek, Nobel Laureate Economist 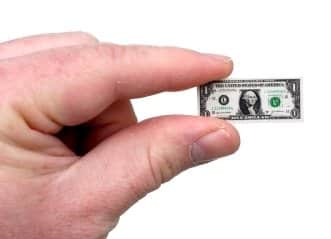 Last week we discussed lifestyle inflation, the inflation that we create ourselves as we grow older by increasing our spending to buy better products and services. When we graduate from Happy Meals to Big Macs to Steak Sandwiches (with table service), we experience lifestyle inflation.

But whether or not we increase our own spending to raise the quality of goods and services we consume, we will experience inflation almost as surely as death and taxes. But how much inflation? We hear numbers like 2, 3, maybe 4% tossed around. A typical financial planner might run projections based on 3 or 3.5% annual inflation to determine how much money we’ll need in future decades.

And here is where the truth about inflation gets ugly.

The reality of inflation is that it is (and has been) much, MUCH greater than we’ve been told. (Ever wonder why those receiving a 2 or 3% cost of living increase can’t seem to keep up with rising expenses?)

The truth is that we’ve been lied to about inflation, blatantly and systematically. How? The government misleads the public by constantly changing the measuring stick that it uses to define inflation.

The CPI (Consumer Price Index) in the United States is defined by the Bureau of Labor Statistics, or BLS. The inflation rate as measured by the CPI is significant because it functions as an index which can be used to regulate prices and calculate adjustments in wages, salaries, pensions, and so on. It is also relied on by many financial planners as a predictive tool of future costs. However, the pricing methodology makes inflation appear to be lower than it really is.

Theoretically, inflation is measured by the Consumer Price Index (CPI) of how a “basket of goods and services” used by a typical consumer changes in price over time. But the basket actually changes over time. If consumers downgrade from steak to burgers then the comparison does not reflect the true increases in costs. Moreover, the basket changes year-to-year, so if beef is up, perhaps apples will be measured instead.

According to Investopedia, “Substitution, the change in purchases by consumers in response to price changes, changes the relative weighting of the goods in the basket. The overall result tends to be a lower CPI.”

Furthermore, the CPI does NOT take into consideration the price to purchase a house (only an estimate of what rent on said house would be). This further prevents the CPI from measuring true cost of living increases, as houses have traditionally in value risen notably faster than the CPI inflation rate.

Even the Bureau of Labor and Statistics website confesses that the CPI is not an accurate measure of cost of living increases:

“Both the CPI and a cost-of-living index would reflect changes in the prices of goods and services, such as food and clothing, that are directly purchased in the marketplace; but a complete cost-of-living index would go beyond this role to also take into account changes in other governmental or environmental factors that affect consumers’ well-being. It is very difficult to determine the proper treatment of public goods, such as safety and education, and other broad concerns, such as health, water quality, and crime, that would constitute a complete cost-of-living framework.”

Translation? Some of your basic cost of living increases aren’t even designed to be reflected in the CPI.

Consider healthcare costs. Seniors spend much more on healthcare than younger consumers – often 20% or more of their income. And yet, a financial planner may tell a client they will be able to “live on less” after retirement and may input a 3% inflation rate into a computer program, which ignores costly realities.

Shadowstats.com measures and discusses CPI at length and draws these conclusions:

The chart below illustrates what CPI might have looked like had the government not switched their tactics for measuring inflation in the 80’s and beyond: 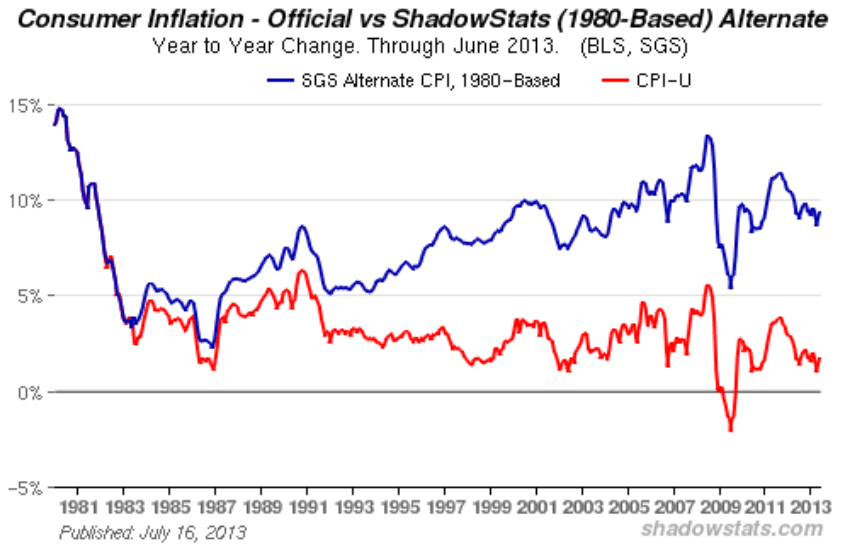 The red represents reported CPI, the blue represents what it would have looked like had measurement methods remained consistent. (Chart courtesy of shadowstats.com)

Clearly, we are being told inflation is one thing, and yet our experience of it is something else entirely. Further effects of these economic smoke-and-mirrors include:

We’ve got a false sense of security. We’re lulled into thinking we have “plenty of money” and may set unrealistic goals, assuming that we’ve accumulated enough. Believing inflation to be in “normal,” even low ranges of 3%, when it is not, we are lulled into a financial fantasy.

We set ourselves up for financial failure. We use inappropriate financial strategies based on misleading information. We might quit working or save less, unaware of the real rate of inflation and the potential effect of continued inflationary tactics employed by our government and banks.

Seniors aren’t prepared for the “sticker shock” they will face for something as simple as assisted living. Families wring their hands wondering if they should sell their mother’s free-and-clear 2700 sq. ft. home in order to move Mom into a 500 sq. ft. one-bedroom apartment with meals and weekly housekeeping to the tune of $5,000 a month or more.

Are We Printing Ourselves Poor?

The government underreports inflation for many reasons.

Printing more money results in more dollars chasing the same goods and services. This raises prices while devaluing the dollar. But we keep printing! In late 2010, the Federal Reserve announced its plan to print 600 billion dollars over an 8 month period of time.

In the short term, the economy seems to recover. In the long term, prices rise permanently.

As Kel Kelly states in Legalizing Capitalism, “Historically, inflation was defined not as rising prices, but as an increase in the quantity of money in circulation. This definition has changed over time in such a way as to conceal the real source of the rising prices – credit creation and expansion.”

Earnest Hemingway asserted, “The first panacea for a mismanaged nation is inflation of the currency; the second is war. …Both are the refuge of political and economic opportunists.” (Note that “inflation” referred to supply of currency, not rising prices.)

According to the authors of The Inflation Deception, printing money is a way to give the government more money to spend while devaluing our savings. The Fed can print more money, but alas, we cannot. 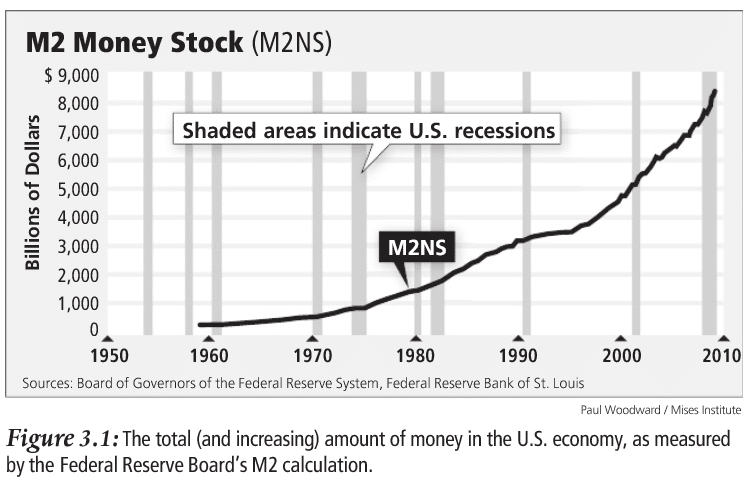 “What’s an investor to do about inflation?

Use inflation to your benefit. How do you do that? In a word, ownership. If you simply sock away money to use “someday,” that money will not go as far as you think, because you’ll always be on the buying side of the buyer-seller equation in an inflationary market. By purchasing income-producing assets such as rental real estate, a coffee business, or income-producing websites, you’ll have something to sell (or rent) and your income will rise along with your expenses.

Economist Milton Friedman said, “Inflation is taxation without Legislation.” There is no doubt that the dollar will shrink as the currency supply grows, which is one fantastic reason to use dollars to purchase assets and not simply accumulate them in a retirement account to be used decades later, when their purchasing power has diminished.

Be aware, keep your eyes open, and don’t believe everything your government, bank, or Wall Street corporation tells you! We invite you to purchase Kim Butler’s recent book, Busting the Financial Planning Lies, and look for the upcoming release of Busting the Retirement Lies on our books page.