This article is adapted from Perpetual Wealth: How to Use “Family Financing” to Build Prosperity and Leave a Legacy for Generations. This forthcoming book from Kim D. H. Butler and Kate Phillips details how to build and keep generational wealth! 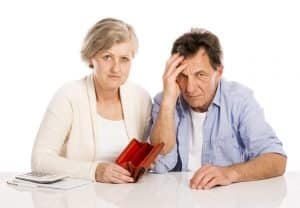 One of Kim’s sayings is, “Saving saves families.” Both saving (as a verb) and the resulting savings (noun) makes a world of difference.

With savings, people can handle emergencies and build up additional capital to invest with. With savings, people can get the education, training or mentorship they need to pursue a fulfilling career. They can purchase a home and not be at the mercy of a rental market. They can start a business and employ others. And they can afford the things that are important to them.

Without savings, people struggle and families are sometimes even torn apart. Financial stress and a lack of savings can threaten families and lasting wealth in multiple ways:

Life does not have to be hard, but if you do not earn and save, it can become difficult indeed. Unfortunately, saving is the thing many people “intend” to do, after they pay their rent, car payment (now averaging $503/month, reports USAToday), phone bill, cable bill, etc. Many families manage to save occasionally, but their savings are spent as soon as an unexpected expense arises. 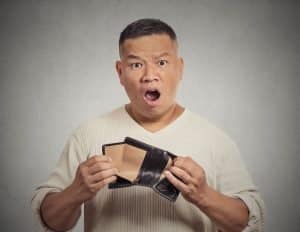 Families that don’t save are constantly at risk. They end up with a lot of multi-layered emergencies, and—in spite of good intentions—no generational wealth.

It’s not just that you can’t afford to rebuild your transmission or replace your car; now getting to work or picking up your child from daycare is also a major problem.

It’s not just that you don’t have anything saved towards your kids’ tuition; now your children might skip college altogether and choose a lower-paying career, leading to lower earnings and their own savings challenges.

It’s not just that Grandma can no longer live independently—she also has no money for assisted living, healthcare expenses, or to hire help. Now adult kids may find themselves traveling for long-distance emergencies, sacrificing their own savings to assist, and/or giving up work to become caretakers to their parents.

Saving money consistently is the first key to personal and generational wealth.

Families that succeed at saving become virtually “storm-proof.” They can successfully weather periods of unemployment, a divorce, an economic downturn, stock market crash (the worst time to pull money out of the market), and other disruptions.

Saving sustains families, and savers sustain others as well. Savers are the silent heroes of our society. They’re the generous givers who fund hospitals, churches, charities, and the arts with their endowments.

While we hear “the rich” demonized a lot these days, the truth is that savers enrich our neighborhoods and communities by daring to think, act, save and give with long-term vision. 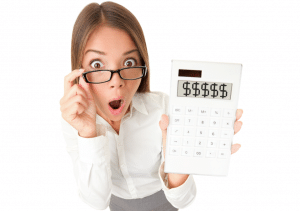 In spite of being a nation of great wealth, the United States is in the midst of a personal and household savings crisis. 57 percent of Americans don’t have enough cash to cover a $500 unexpected expense, revealed a 2017 Bankrate survey. In March 2018, 20SomethingFinance.com sounded alarms about the negative savings rate of Millennials—an average savings rate of -1.8 percent. Millennials are spending more than they save.

And the rest of America isn’t doing much better. The chart below from the St. Louis Fed and the Bureau of Economic Analysis show that the US savings rate dipped to 2.4% in December 2017—the lowest rate since before the Financial Crisis—bouncing back to a nearly-as-depressing 3.1% in early 2018. (Keep in mind that these savings rates include employer-sponsored retirement accounts.)

And in spite of what Americans may tell themselves, the problem isn’t “not enough income.” As recent figures from the OECD (Organization for Economic Co-operation and Development) show, while recent household savings rates for the US have hovered around or below 5%, citizens in other countries put us to shame:

How—and why—do the Chinese manage to save 37% of their income? After all, the average household income in China equates to a mere fraction of the average US income.

One reason for high savings rates is the fact that China has marginally fewer safety nets (social security, unemployment). So there is justified greater fear about the “what if’s.” Also, there are no credit cards, no ready financing for purchases, and homes require a minimum of 30% down payment, which provides strong motivation to save. Saving is also simply part of the culture. It’s “what people do.”

“I try my best to make life better for my family,” says Yuki, a young woman who lives in a tiny studio apartment in Shenzhen, a large city in China. As Yuki explains to an OWN journalist, she earns the Yuen equivalent of $1,000/mo USD and sends half of her earnings to her family. They live on farmland in a poor rural area in China where even “a single car would be the envy of all our neighbors.” says Yuki.

Simplicity, or what some might call minimalism, is also part of the culture. Kevin Yu, a Chinese-American who worked in China for a few years, noticed how much more simply his Beijing neighbors lived—even though they were a “middle-class couple with great jobs at a major Chinese bank,” and Kevin was just out of college. “Compared to my stuffed apartment next door, they lived very simple lives. They barely had any furniture. Their large living room held a television and a dining table. That was it.”

When Kevin taught English in Changchun, China he noticed that many people, particularly his students, didn’t change their clothes frequently as Americans do. They would wear only one or two outfits, day after day. One day, a student said something he would never forget: “We think you’re rich because you change your clothes every day.” Kevin realized how much his life in America has been influenced by advertising and cultural messages around consumption. “It can be hard to see the signal for the noise when we are bombarded constantly with the message that we need to buy.”

As Kim presents in the Prosperity Ladder concept In Busting the Financial Planning Lies, saving is absolutely critical. It’s necessary to take us from subsistence to comfort, and it’s a prerequisite to prosperity.

As you can see in the diagram below, work is the action that takes you from poverty (or childhood dependency) to subsistence. Subsistence means you’re okay as long as everything is “okay”—no emergency car repairs or unexpected vet bills. Saving is what takes you to from subsistence to comfort. Being comfortable means you have a cushion. You can afford some wants and not just needs. Owning assets will eventually take you to prosperity.

Notice that no matter how much you earn, you cannot get to prosperity without saving: 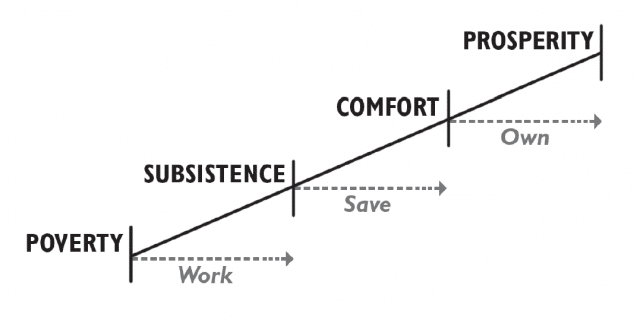 Many millionaires and sophisticated investors have lost it all due to bad bets, fraud, or market swings that wiped out their assets. Kate was invested heavily in real estate (with not enough in savings) and lost her entire net worth in the Financial Crisis. We have an investor friend who has become a millionaire three times—and lost everything three times. This is what can happen when you neglect to save first—before investing.

You can’t leapfrog past saving. It just doesn’t work. Your savings creates the foundation of your personal economy. Those who build their financial homes on sand often do not survive the next financial storm.

The people of China are climbing the ladder. The Chinese save diligently, realizing all too well that they must make the best of every opportunity. They forego conveniences and wants in order to secure the future of their families.

America used to be a nation of savers. But now, it seems our heroes and celebrities are big spenders, high-rollers, and spoiled heiresses. Some Americans are moving the wrong direction, down the ladder. Perhaps we could use more self-reflection about wants vs. needs, and greater motivation to save.

The generation that lived through the Great Depression knew true hardship, and became diligent savers. But that generation is dying out. Today, with car loans, mortgage financing and credit cards readily available, many households feel little need to save cash. Many Americans take wealth for granted—or at least, the appearance of wealth.

Incessant advertising urges us to “Buy, buy, buy!” so we can feel more successful, more attractive, and somehow, happier. Cars have to be parked in the driveway because the garage is full of “stuff.” Storage units are rented for what won’t fit in the overstuffed closets or garage. Americans spend what they make, then keep spending on credit. Our government does the same thing. Americans look wealthy—but looks can be deceiving.

If you wish for your family to do better, realize that the culture around you will not encourage you to save. You must create your own culture. To build and keep generational wealth, your family must adopt a habit and a structure for saving consistently. Without this, even the best of intentions will be short-lived. 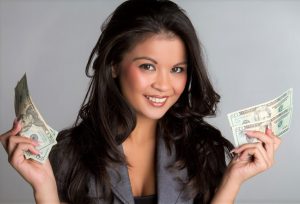 (To be clear—you should invest as well as save, but it is saving that creates the foundation of your personal economy… your Family Fund.)

Saving is boring. Fiscal discipline is dull. Nobody watches reality TV shows about savers. It doesn’t require great skill, specialized knowledge or a university degree. You don’t need special gear, or the latest technological device. You just need to do it!

Let’s fix the American savings crisis! Simple steps to get and stay on track: 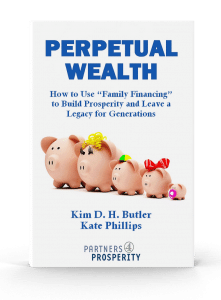 The Bottom Line: Your family’s long-term prosperity begins with the simple act of saving: Earn more than you spend and save 15-20 percent of your income. The habit of saving is the “secret” to family wealth and one of the most important financial lessons you can teach your children.

Find out more about where to keep your cash savings in “Where to Put Money Now in 2019.”