“If you got a dollar, soak it away, put it in a savings bank, bury it, do anything but spend it. Spending when we didn’t have it put us where we are today. Saving when we’ve got it will get us back to where we was before we went cuckoo.” 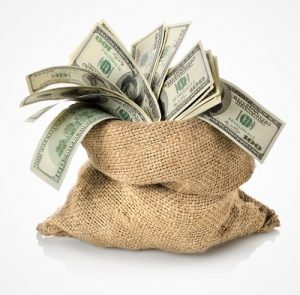 Is it time to go to cash? If we only had a crystal ball, we could give you a definitive answer! However, we can look at patterns of the past and analyze the present. As we do this, it’s hard not to notice the warning signs that suggest 2018 may be an ideal time to move more assets into cash and other fixed and safe havens.

Below are seven signs that may indicate that trouble is on the horizon, and some steps you can take to protect yourself. You’ll also find some seemingly relevant quotes from a past era sprinkled throughout, compliments of Will Rogers. A Depression-era American humorist and social commentator, his observations seem particularly appropriate to today’s economic climate.

“Our whole Depression was brought on by gambling, not in the stock market alone but in expanding and borrowing and going in debt, all just to make some money quick.” (Radio, May 5, 1935)

Anyone betting on Facebook to continue its impressive upward trajectory lost big-time two weeks ago. The stock’s 19% one-day drop was the biggest single day market value drop EVER, representing a $120 billion dollar loss in market capitalization. 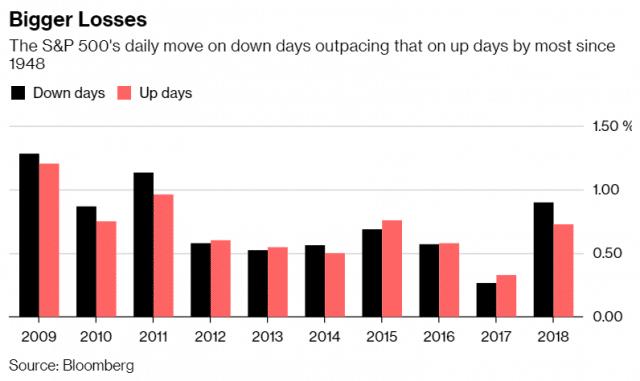 The Smart Money Flow Index, a trend-based indicator, has been falling, which suggests a market downtrend may soon follow. The SMFI is a leading indicator that analyzes market patterns in an attempt to discern when the “smart money” is selling. It has correctly predicted previous stock corrections and crashes, as you can see below:

However, it’s also possible that the falling SMFI was due to large sell-offs in “FANG” stocks—Facebook, Apple, Netflix and Google (Alphabet), and that we’ve already seen this correction in a stocks such as Facebook. While average investors have been loading up on shares of FANG stocks, insiders have been selling, reports ZeroHedge.com.

“The way to make money in the stock market is to buy a stock. Then, when it goes up, sell it.”

Stocks have run out of steam, and the bull market has lost all momentum. The Dow is up 3.5% for the year, and the S & P 500 has gained 6.89%, but these gains were made in the first few weeks of the year. The S & P has made several valiant attempts at surpassing its January 26 high, but so far, it has not succeeded. The Dow is still more than 100 points behind its January high.

International stocks are also having a rough year, as the Global Dow’s 0.4% YTD gain demonstrates. The losses in Asia are alarming, with the Shanghai Composite bleeding 16% so far this year. European stocks show miniscule gains, on average (except Turkey, also with a 16% YTD loss). South America is at a virtual standstill, with various countries showing single digit losses (Argentina, Chile) or gains (Brazil).

All in all, the signs seem to point to a stock market that is overvalued and perhaps ripe for further corrections or even a crash.

“The whole financial structure of Wall Street seems to have fallen on the mere fact that the Federal Reserve Bank raised the amount of interest from 5 to 6 per cent. Any business that can’t survive a 1 percent raise must be skating on mighty thin ice…” (Daily Telegram, Aug. 12, 1929)

It’s hard to even remember when the Federal Funds rate topped 6%, but that was only 11 years ago, from June 29, 2006 until August 17, 2007, when the subprime mortgage crisis became too apparent to ignore. At that point, rates began their decline when the Federal Open Market Committee dropped rates .50%, followed by another drop one month later. The Fed rate hit rock bottom (.5%) in December of 2008 and remained there for nearly three years.

Since the 2016 election, we have seen six rate hikes, each a modest .25%. The Fed rate has doubled from 1.25% at the time of the election to 2.5% in June of 2018. While this is great news for anyone with a savings account, it makes debt more expensive. Of course, this impacts businesses that have become dependent on nearly-free capital as well as our rising national debt.

President Trump is not-so-subtly trying to influence the Fed to keep rates low, but it is impossible to know where future rates will go. However, historical trends show a clear pattern that is not comforting. As one Forbes article notes, “when the Fed embarks on a rate hiking cycle like this, recessions occur most of the time.”

“Borrowing money on what’s called ‘easy terms,’ is a one-way ticket to the Poor House. If you think it ain’t a Sucker Game, why is your Banker the richest man in your Town? ” (Weekly Article, March 18, 1923)

Not unlike pre-Great Recession—or pre-Depression—trends, saving is down and spending is up. Debts on auto loans and credit cards are climbing more than 7% annually, according to CNBC.com. Consumer debt is set to reach a high of $4 trillion by the end of the year. Figures from LendingTree indicate that Americans owe more than 26 percent of their disposable income to consumer debt—also an all-time high.

Of course, the country is addicted to credit as well. The national debt has now risen to well over $21 trillion. The debt climbs by a million dollars every 45 seconds, and according to USDebtClock.org, amounts to over $175,000 per US citizen. Projections from the Peter G. Peterson Foundation show that—short of a substantial change in policy—it is likely that the interest on the national debt to become the largest line-item in the U.S. budget within a few decades.

“There are two things that can disrupt business in this country. One is war and the other is a meeting of the Federal Reserve (Board).” (Daily Telegram, April 2, 1929)

As we reported earlier this year, 2018 has been a bad year for bonds. A quick scan of bond benchmarks shows that most bond indexes and funds have lost money this year: typically between .5% and 5%.

So much for balancing stocks with bonds to protect against loss!

And with interest rates on the rise, the bond market is not likely to turn around soon.

“If we want anything, all we have to do is go and buy it on credit. So that leaves us without any economic problem whatever, except perhaps someday to have to pay for it. But we are certainly not thinking about that this early.” (Daily Telegram, Sept 6, 1928)

As some markets continue to rise to record highs, there is no definitive answer to this question. However, we are observing some current trends that suggest caution:

“Sure must be a great consolation to the poor people who lost their stock in the late crash to know that it has fallen in the hands of Mr. Rockefeller, who will take care of it and see that it has a good home and never be allowed to wander around unprotected again.” (Daily Telegram, Oct. 31, 1929) 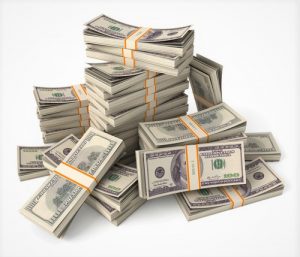 Since it’s hard to know if you are reading the signs of the economic times correctly, many look to see what those with substantial wealth are doing. Bloomberg editor Robert Burgess has this to say in “Smart Money Club Has Kicked Out the Optimists”: “Right now, the so-called smart money is saying run and hide.”

Burgess goes on to point out that those of us expecting a market crash in 2017 (2016, 2015) were wrong. But he also notes that the Smart Money Flow Index (see #1) was rising throughout 2017. (In other words, the Smart Money has been leaving the market to return when stocks go “on sale.”)

The latest CNBC Millionaire Survey, conducted in April by the Spectrem Group found that investors with one million or more in assets are more likely to increase their short-term holdings—cash, CDs, fixed income, treasury bills, money market accounts, and savings accounts—rather than equities this year. Additionally, 35 percent of millionaires age 55 and under and 37 percent of investors with $5 million or more are likely to increase their fixed income holdings.

A related survey found that confidence in the S & P 500 had dropped 20 points since last fall. Only a minority of wealthy respondents expect the US economy to end the year stronger than it began.

Are you prepared for a bear market?

These seven warning signs don’t mean that we WILL see a market crash or recession next week, next month, or even next year. But they DO indicate that if there was ever a time to be cautious with your investments, that time is now! We have seen nearly a decade of gains, and it cannot last.

In our next article, we’ll discuss how to protect your portfolio from loss, including several cash equivalents that can be used temporarily when market conditions are unstable. In the meantime, consider talking to your retirement plan administrator (this could be your HR department or a third party administrator). Find out what choices your plan offers for cash equivalents, and next week we’ll discuss some long-and-short term options to protect portfolio from a downturn!

Want to feel secure and “ready for anything”? Learn 7 strategies to prepare for–or avoid—an emergency or economic disaster.

Want our help? Reach out to us to schedule a conversation. There’s no charge, no obligation, no sales pitch, and no pressure… just answers to your questions and honest advice.