The Giving Trend: The Changing Face of Charitable Giving

‘Tis the season to give thanks, to celebrate, and, perhaps most importantly, to give! In this article, we take a look at philanthropy in the U.S. and examine the trends that impact and transform charitable giving.

Americans Are More Generous Than Ever! 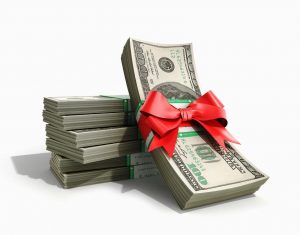 As we reported a year ago, 2015 represented new highs in giving. That record was broken again in 2016, with total charitable donations rising to a new high of $390.05 billion, according to Giving USA, which produces the comprehensive reports on philanthropy in America.

Total 2016 charitable giving from was up 2.7 percent from the revised estimate of $379.89 billion in 2015. The largest rise in giving comes from individuals, with a 4% increase, compared with smaller increases in giving from foundations and corporations, and a decline in giving by bequest (through estates).

Perhaps most significantly, all 9 major categories of charitable giving saw increases from 2015. Aggie Sweeney, chair of Giving USA Foundation said the report demonstrates  the generosity of Americans “it being a year punctuated by economic and political uncertainty… (and) the resilience of philanthropy and diverse motivations of donors.” The 9 categories of recipient organizations tracked are:

Although giving to religious organizations easily captures the most donations, the largest gains in giving were to the environment and animals (7.2%) and international affairs (6.4%), which includes development and humanitarian relief. This infographic from Forbes shows where our dollars are going: 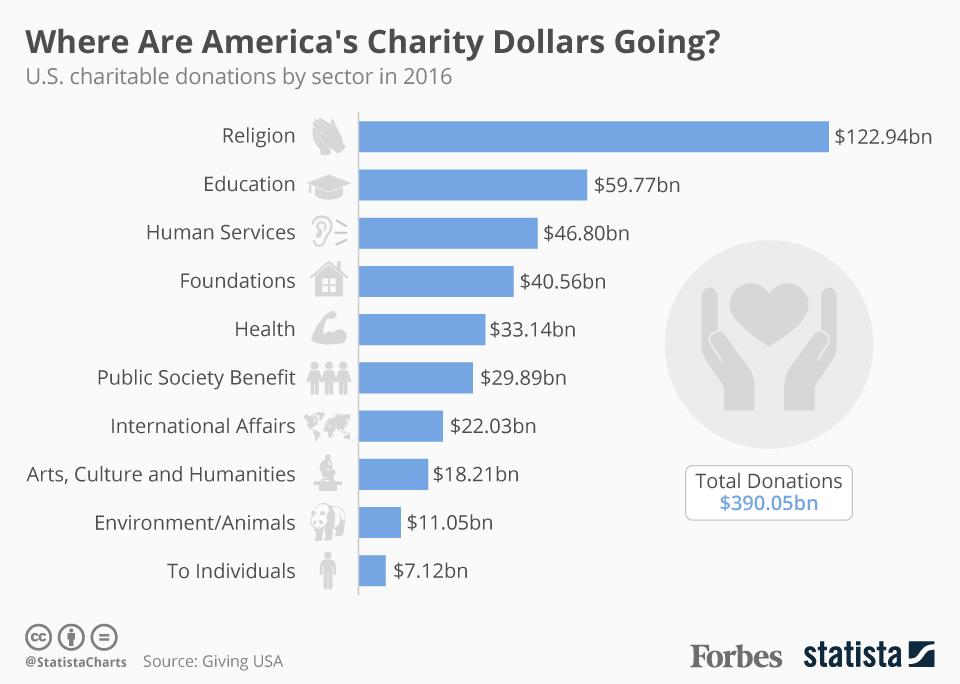 Learn more about the nine categories and how charities are classified at CharityNavigator.com

People are often encouraged to give of their “time and treasure,” remembering that giving of one’s time can be as important as giving money. According to VolunteerMatch.org, volunteerism has been on a slow decline for over a decade. In light of that, it is encouraging that at least giving of one’s “treasure” is still strong in America.

Aside from increases in overall and individual giving, there are other notable trends that are changing charitable giving in America.

1. Giving Has Gone Social and Viral

According to MobileCause.com, Millennials prefer to give to causes they hear about from friends. Giving choices are often social, and social media plays an increasingly large role in individual donations. When responding to giving campaigns on social media, givers can share that they donated on their social networks, encouraging friends to do the same.

Recent data from Blackbaud’s annual Giving Report shows that online giving grew nearly 8 times faster than overall giving in 2016. Online donations now comprise 7.2 percent of all fundraising, and we can expect that figure to keep rising.

The 2014 ALS Ice Bucket Challenge raised over $100 million for ALS research, or Lou Gehrig’s disease. Celebrities doused themselves with ice water, donated, and challenged others to do the same. Best yet, the money raised led to a huge breakthrough in research! Here’s Bill Gates taking the challenge: 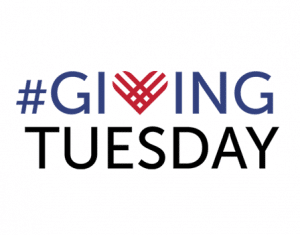 This last Tuesday was the sixth annual #GivingTuesday event, which follows Black Friday and Cyber Monday and reminds people to remember nonprofits. Online donations have climbed steadily for #Giving Tuesday, with 2016 donations of $177 million representing an increase of over 50% from 2015 donations.

The good news of social giving is also a challenge for nonprofits. An article from Civil Society declares, “Social media has changed the world; charities have to keep up.” Chris Michaels, a speaker at the 2016 Charity Technology conference, urged nonprofits to embrace social media and “the explosion in video,” noting that those who use video effectively to “tell stories,” are the ones who will thrive in the coming years. “We have to take this stuff extremely seriously,” said Michaels, because it is “not going to change back.”

With 74% of smartphone users reading emails on their mobile device and 90% of regular Facebook users logging in from their phones, mobile communication is at the forefront of charitable giving in 2017. Clickable payment buttons in emails, text-to-give options, and expanding payment options to include PayPal (eliminating the need to get out a credit card and enter all the information) are three ways that nonprofits are promoting more convenient giving options in response to technology trends.

There is a powerful synergy between giving trends. Social media, mobile technology, and crowdfunding work together to increase donations from individuals and to spread the word about nonprofits that may not be as well known. The PayPal Giving Fund now raises in excess of $86 million annually on EBay.

3.  The Rise of Crowdsourced Giving 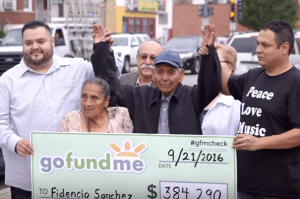 There are many needs in the world, and crowdfunding websites found a new way to help connect people in need with people willing to give. GoFundMe, the largest crowdsourced giving platform, has helped people raised $3 billion since 2010. The first billion took 3 years, the second billion took 9 months, and the third, only 7 months.

Combined with the power of social media, sometimes campaigns go viral. In Chicago, Joel Macias started a GoFundMe campaign that raised a phenomenal $380k for “Fidencio the popsicle man,” an 89-year old street vendor who sells frozen treats on the sidewalk to help support his family, including a wife who was ill and grandchildren who had recently lost their mother, Fidencio’s only daughter, previously the family breadwinner. As Macias told CBS Chicago, the sight of hunched-over Fidencio pushing his popsicle cart “broke his heart.” He bought 20 paletas, gave him a $50, said “May God bless you” and drove away, but not before taking a picture that generated a huge response on Facebook. A friend suggested he start a campaign to help Fidencio and his family, and the campaign quickly blew far past the original goal of $3,000 when thousands of people were inspired to donate to the campaign.

More people have donated to online fundraising campaigns (22%) than have used a ride-sharing app (15%), and yet the impact on traditional giving to nonprofits has been surprisingly minimal. Inside Philanthropy points out that crowdfunding is quite different from traditional philanthropic giving. Few campaigns are sponsored by 501(c)(3) organizations, and most donations are not tax-deductible. Most recipients are individuals in need, from pet owners with big vet bills from emergency canine surgery to musicians raising money to produce their next album. Some nonprofits who have tried to harness crowdfunding platforms have had disappointing results, as campaigns don’t work well for ongoing giving.

However, new platforms such as Crowdrise are now catering to nonprofits, and sites such as Charity Navigator that aggregate vetted nonprofits are harnessing the crowdfunding trend for established charities.

4.  Customers and Employees Prefer Companies who Give 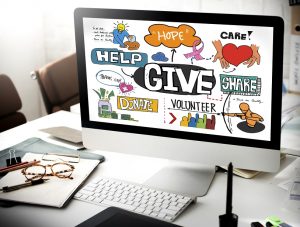 More so than other generations, Millennials (born 1982-2003) tend to define success by the philosophy “doing well by doing good.” According to Galaxy Digital, a company that makes software to track volunteerism, Millennials strongly prefer to work for companies that have a strong track record of corporate social responsibility and employee volunteerism. Additionally, 67% of Millennials are more inclined to purchase from a company that contributes to charities than one that doesn’t.

As the workforce swells with Millennials, expect to see employee giving and volunteer opportunities to rise, as well as employer-match giving such as the wildly successful Microsoft Employee Giving program, which has matched $71 million dollars of employee donations with a 74% employee participation rate. This philanthropic shift will continue to affect corporate culture, and happily, we can expect to see more win-win partnerships between corporations, employees, and nonprofits.

5.  More Than Ever, Charities Rely on Wealthy Donors

This trend could represent risks for certain nonprofits, as large donations can be more unpredictable. It also represents the need for non-profits to shift towards cultivating major donors, a move that could be potentially compromising to the mission of some nonprofits.

6.  Progressive Causes Have Experienced a Surge in Donations

In 2016, right-leaning Americans concerned about the direction of the country voted in a new Republican president and a conservative vice president, while left-leaning Americans rushed to support the causes they fear may be threatened by the new administration. organizations such as Planned Parenthood, the ACLU, the Sierra Club and the International Refugee Assistance project received record donations in a short amount of time following the election.

7.  But Conservatives Still Lead as Givers

Speaking of liberal vs. conservative giving trends, controversial research by Arthur Brooks summarized in his book, Who Really Cares? The Surprising Truth About Compassionate Conservatism, busted even his own preconceived notion that liberals give more. Brooks found that conservatives tend to give more money to charities, more hours as volunteers, and more blood to blood banks than liberals, leading the New York Times to detail the findings in an enlightening article titled, “Bleeding Heart Tightwads.”

Research from other sources confirms that those from more conservative “red states” easily out-give those from (especially the northeastern) “blue states.” The infographic from The Huffington Post relates charitable giving patterns to voting patterns from the 2012 election (similar to the results of the 2016 election): 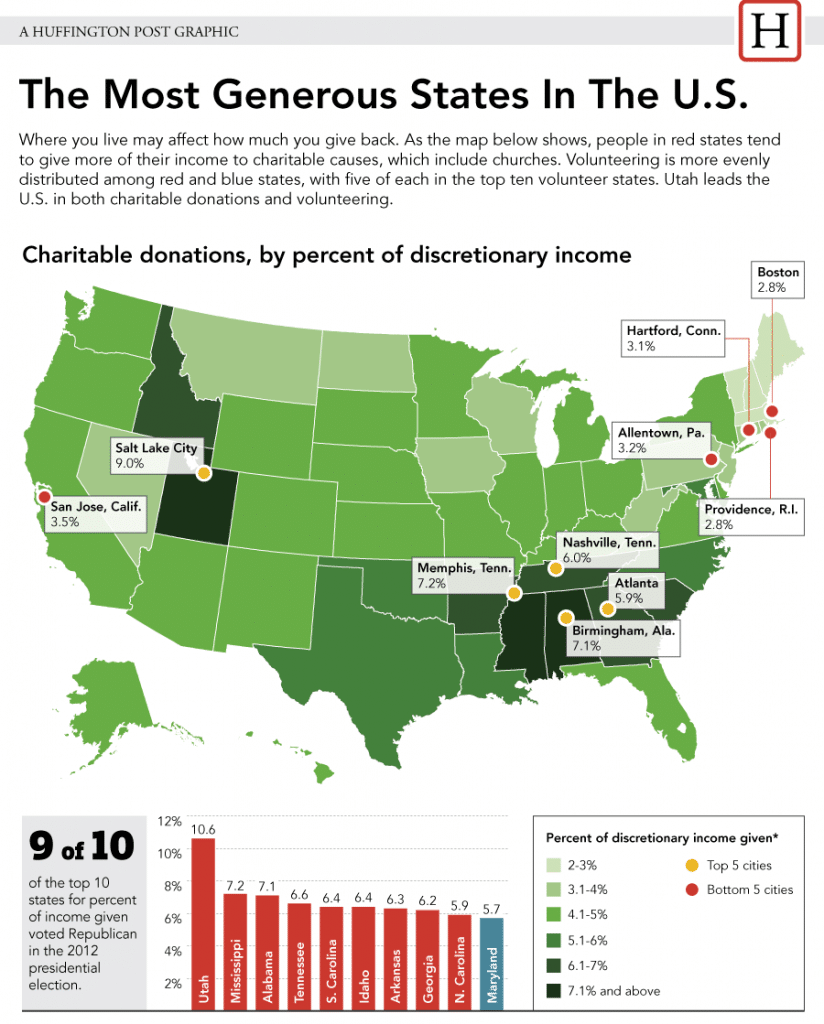 (Click here for the whole article and extended infographic, including volunteer hours.)

The most generous state of the union? Reports WalletHub and other sources, Utah is consistently home to the biggest givers, where citizens donate an average of 6.6% of their income to nonprofits. As a 2013 MIT study, “Who Really Gives?” noted, one reason that Utah shines when it comes to giving is that conservatives give more to churches and religious organizations. Mormons, it turns out, top the list of generous givers, donating more than practitioners of other religions and denominations. With a high percentage of Mormons (62%, according to the Salt Lake City Tribune), Utah tops the list in volunteerism as well as charitable donations.

The Prosperity Economics Movement (Our Nonprofit!) 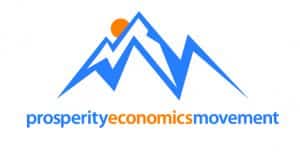 My husband, Todd Langford, and I (Kim Butler) founded a nonprofit a few years ago to help spread the message of Prosperity Economics, a financial philosophy we share with an increasing number of (especially) North Americans. Prosperity Economics seeks to help us gain back control of our money from Wall Street firms and government lobbyists who prefer we keep it at risk and subject to greater future taxes. Using financial strategies and products that existed long before the 401(k), we teach people how to keep more of their money and make it work harder for them!

What Do You Support and Why?

We’ll share more about the Prosperity Economics Movement in a future article. For now, we’ll end with a challenge for you… (don’t worry, it doesn’t involve ice water!)

What are YOUR favorite charities and nonprofits to give to? What inspires you to support them? We’d love to know in the comments below!